The Kennedys in Concert at the Cinema Arts Centre, Oct. 17

Popular folk-rock duo The Kennedys will perform in concert at Huntington’s Cinema Arts Centre on Thursday night, Oct. 17, as part of the Folk Music Society of Huntington’s monthly Hard Luck Café series. The 8:30 p.m. concert in the Cinema’s Sky Room will be preceded by an open mic at 7:30 p.m. Tickets are $10 for Cinema Arts Centre and FMSH members; $15 for non-members. The Cinema Arts Centre is at 423 Park Avenue in Huntington. For more information, visit www.fmsh.org or call (631) 425-2925. 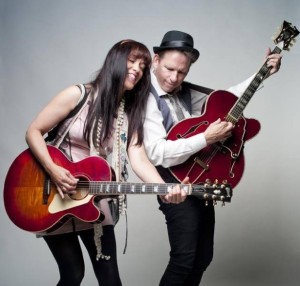 The Kennedys are a cutting edge hip-folk couple who wield plugged-in acoustic guitars but Folk Music Society of Huntington audiences, like those across the nation and overseas, have quickly figured out that Pete and Maura Kennedy defy the stereotypical notion of folk. Over the course of 12 CDs and countless touring miles since 1995, the New York City-based singer-songwriter duo has carved out its own niche in the indie music scene – somewhere between pop and acoustic rock, not too loud but brimming with super-sized energy. With “gorgeous boy-girl harmonies and catchy tunes” (Entertainment Weekly), The Kennedys can always be counted on to bring an exuberant mixture of folk, rock, country, and pop.

Pete and Maura Kennedy initially met at the famed Continental Club in Austin, Texas. Within a few weeks, they went  on their first date at Buddy Holly’s grave in Lubbock, TX, and within a year, they were touring together as part of Nanci Griffith’s band and  as the opening act on her two-month tour of the British Isles and Ireland. Since then, they have channeled their personal musical influences — which include Bob Dylan, Dave Carter, The Beatles, The Byrds and Richard Thompson into their own unique, uplifting and high-energy style. The Kennedy’s most recent CD, Closer than You Know, was released last year.

Pete Kennedy grew up in the Virginia suburbs of Washington, D.C. Well known for his prowess on stringed instruments, Pete plays six- and 12-string guitars, electric sitar, bass, mandolin, banjo, ukulele, and the drums. He also sings, writes songs, and is a recording engineer and producer. Maura Kennedy hails from Syracuse, NY, where she began her performing career on the local club scene. She sings, writes, and plays electric guitar, acoustic guitar and ukulele onstage. The Kennedys have performed in venues large and small throughout the United States, and have recently returned from another tour in Ireland. They are frequent performers at the Falcon Ridge and New Bedford folk festivals, performed at both of President Bill Clinton’s inaugurations, and have been a popular featured act for the Folk Music Society of Huntington.