November 12, 2013 11:24 am | Filed under: Around Town,Arts & Entertainment,Huntington Union Free School District,News | Posted by: The Huntingtonian 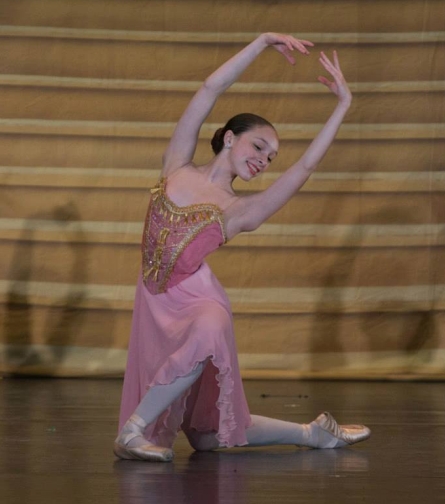 Alexandra Smith, a ninth-grade honors student at Huntington High School, was recently awarded a National Training Scholarship from American Ballet Theatre. Of the 1,100 students who attended American Ballet Theatre’s Summer Intensive Programs across the country this year, only ten young dancers were selected by the Nominating Committee to receive this honor.

As part of Alexandra’s award, she receives a full scholarship to the 2014 ABT Summer Intensive Program in New York, as well as $3000 to put towards housing during the program and her year-round training expenses.

A student of Karen Lynch since the age of six, she has performed numerous soloist roles in Lynch Ballet Company performances, including Nutcracker, Sleeping Beauty, and SwanLake. Last spring she received the bronze medal at the American Ballet Competition. Alexandra has also been awarded a scholarship to the Washington Ballet Summer Program for 2014, and for four years has placed in the Long Island Ballet Competition. She attended the New YorkStateSchool of the Arts Summer Program where she received a commendation for meritorious achievement.

Karen Lynch, Alexandra’s ballet teacher and Artistic Director of Lynch School of Ballet in Huntington, speaks of Alexandra with great pride, “Ever since I began teaching Alexandra at the young age of six, she has shown great potential and talent in ballet. Through the years, she has developed into a beautiful young dancer with an incredible work ethic in the studio.  She also possesses a unique stage presence and artistry that is far behind her years.  I am excited to see what the future holds for her in dance.”

When asked how she feels about receiving such a prestigious award, Alexandra states, “I feel honored, humbled, and very excited to be one of the recipients of this year’s American Ballet Theatre National Training Scholar program.  American Ballet Theatre has been an inspiration to me since my first ABT Summer Intensive at the age of 10 because of the program’s professional and inspiring atmosphere.  I am grateful to my teachers at Lynch Ballet for their guidance, support and encouragement to be all I can be.”

Alexandra has also excelled in academics, music and art. She is a member of the National Junior Honor Society and has been recognized for outstanding achievement in English, French, Art and Orchestra. Among her awards are ranking nationally in Le Grand Concours French Exams, recognition in the State of New York Americanism Essay Contest and in the Jupiter Hammon Poetry and Essay Contest. She has participated in NYSSMA for cello for five years and has been awarded two summer study scholarships. She also placed second in the the “Windows of Susceptibility” Project Art Contest to benefit cancer research, Prevention is the Cure.

Congratulations to Alexandra who has proven herself to be an exemplary student in the classroom and a true artist on stage.