November 13, 2013 6:28 am | Filed under: Around Town,Events,Huntington Union Free School District,News,Sports & Schools | Posted by: The Huntingtonian 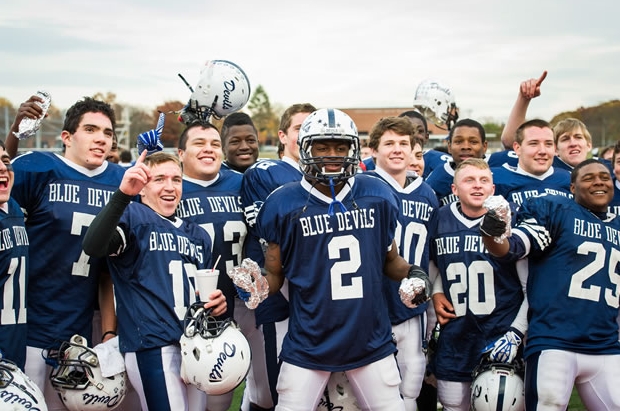 The Huntington High School football team established its ground game early in last Saturday’s Suffolk Division III quarterfinal game and went on to defeat Hauppauge before a crowd of 800 at Blue Devil Field, 35-14.

Troy Greene rushed 22 times for 181 yards and Lavar Butts added 118 yards on 17 carries as Huntington amassed 328 yards on the ground to grind out a victory and advance to next weekend’s semifinal round against Bellport. 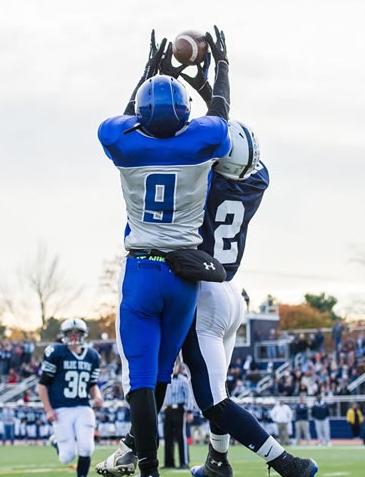 “We were very effective moving the ball on the ground, which opened up some passing opportunities,” said Steve Muller, the Blue Devils’ longtime head coach. “We executed well and kept our composure.”

No. 5 Hauppauge, which came into the game with a 6-2 mark, was looking to upset No. 4 Huntington on its home field. The game played out on a crisp fall afternoon before enthusiastic fans. After battling to a 7-7 halftime tie, the Blue Devils scored 21 consecutive second half points to grab a 28-7 lead and grab firm control of the game.

“I don’t think our team really worries about what the opponent’s record is,” Kocis said. “We just go out on the field and play like it’s our last game because for all of us seniors, it may very well be. We knew what we had to do from the beginning, which was come out strong and put up points early. We managed to score on our first drive, which was huge.”

After a scoreless first quarter, Huntington took a 7-0 lead when Kocis zinged a 16-yard touchdown pass to Jamison. Justyn Tesoriero followed with the first of five extra points. The Eagles rallied to tie the score on a 30-yard touchdown pass, but the second half belonged to the Blue Devils.

Butts scored twice in the final frame, with the first coming on a one-yard plunge and the second on an exciting 23-yard run. Hauppauge scored on a 28-yard pass play in between Butts’ touchdowns, but the Eagles were unable to make up any more ground.

While Huntington’s offense hummed, the Blue Devil defense repeatedly came up big, especially when it counted, including a goal line stand. “I couldn’t be more proud of our defense,” Muller said. 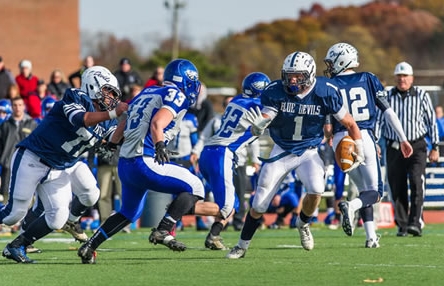 Huntington will host No. 6 Bellport (5-4) on Saturday at 1 p.m. at Blue Devil Field in the Suffolk Division III semifinals. Admission is $6 for fans 12 years old and up. The Clippers topped No. 3 Eastport-South Manor (7-2) last Friday night, 14-0 to advance. Huntington defeated Bellport at home on October 26 in a thrilling contest, 17-13.

“Our goal from the start of the season was to make the playoffs and get back to Stony Brook for the championship,” Kocis said. “This year especially, we have a great chance at doing that. We are coming off a great win, which should give us momentum going into out next game against Bellport.”

“We need to play a game free of mistakes to beat Bellport,” Muller said. “They are well-coached with very good players. We’ll work hard all week to make sure we’re ready for them.”