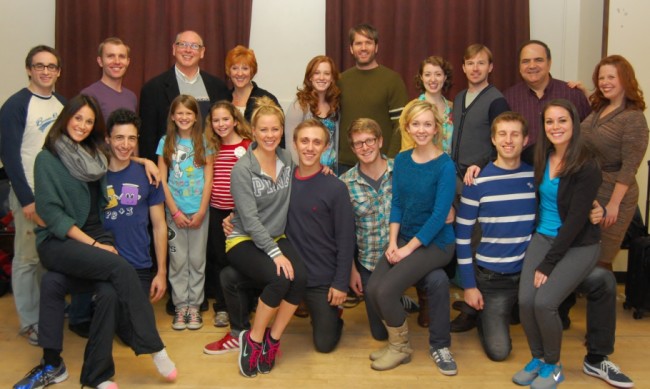 Based on the beloved and timeless film, this heartwarming adaptation features songs by Irving Berlin and a book by David Ives and Paul Blake. Follow successful vaudeville stars and veterans Bob Wallace and Phil Davis as they head North to pursue romance with a duo of beautiful singing sisters en route to their Christmas show in Vermont. This family classic features beloved classics including Blue Skies, I Love A Piano, How Deep Is The Ocean and the perennial favorite, White Christmas. WHITE CHRISTMAS is an uplifting musical and a perfect way to spend holiday time with your loved ones.

The Director, MARK ADAM RAMPMEYER, is the Associate Artistic Director of The John W. Engeman Theater at Northport. Previous directorial credits at The Engeman include A CHRISTMAS CAROL – A GHOST STORY OF CHRISTMAS and 42ND STREET for the main stage, as well as several Youth Theater Series Productions including PINKALICIOUS, RAPUNZEL, ALICE IN WONDERLAND, GOODNIGHT MOON, and the seasonal favorite FROSTY.  As a stylist his work has been seen on Broadway in PHANTOM OF THE OPERA, BEAUTY AND THE BEAST, SUNSET BOULEVARD, and ALL SHOOK UP.  Broadway design work includes TALLEY’S FOLLY, LYSISTRATA JONES, WEST SIDE STORY and THE FARNSWORTH INVENTION.  He was the recipient of a 2010 Drama Desk award for his contributions to the design team for Horton Foote’s ORPHANS’ HOME CYCLE at the Signature Theater.

The Choreographer, DREW HUMPHREY (who also plays Phil Davis) has appeared at The Engeman in 42nd STREET.  Broadway credits include WHITE CHRISTMAS (Original Cast Recording); New York/Tours: OF THEE I SING (Encores!), 42ND STREET (1st National).  Drew also had the honor to perform at the Kennedy Center for Ted Kennedy and President Obama.

The cast of WHITE CHRISTMAS features: AARON RAMEY (Bob Wallace) Broadway credits include JEKYLL & HYDE, YOUNG FRANKENSTEIN, CURTAINS, MILLIE (Original Cast). National Tours include SOUTH PACIFIC and DISNEY’S BEAUTY & THE BEAST.  KENNEDY CAUGHELL (Betty Hayes) most recently played the role of Heather on the Int’l/2nd Nat’l tour of AMERICAN IDIOT! Regional credits include Sarah Brown in GUYS AND DOLLS (New London Barn), Little Red in INTO THE WOODS (CPCC), and Ado Annie in OKLAHOMA! (Discoveryland). DREW HUMPHREY (Choreographer and Phil Davis) returns to The Engeman, where he was last seen in 42ND STREET .  Drew appeared in the Broadway production of WHITE CHRISTMAS. Regionally he was seen in CRAZY FOR YOU, SINGIN’ IN THE RAIN, CATS, THE MUSIC MAN, WEST SIDE STORY.  Drew has also performed at the Kennedy Center for Ted Kennedy and President Obama. DARIEN CRAGO (Judy Hayes) played Peggy Sawyer in The Engeman’s production of 42nd STREET last season and went on to perform in DAMES AT SEA at the Infinity Theatre Company, Paper Mill Playhouse’s THOROUGHLY MODERN MILLIE, and the Broadway National Tour of WHITE CHRISTMAS. KATHRYN KENDALL (Martha Watson) been featured in the National Tour of WHITE CHRISTMAS and performed the role at the Kennedy Center. NY and National Tours include JEROME ROBBINS BROADWAY, 42nd STREET REVIVAL, NUNSENSE, SHOWBOAT, MERMAN! (Lincoln Center) and ANYTHING GOES. DREW TAYLOR (General Waverly) was recently seen in THE MUSIC MAN at The Royal Opera House. Broadway credits include SWEET SMELL OF SUCCESS, THE SECRET GARDEN, ANNIE . National tours and Regional credits include ANNIE , OLIVER, GIGI, CAN-CAN  w/Chita Rivera as well as performances at Goodspeed, Papermill, The McCarter and THE RADIO CITY MUSIC HALL CHRISTMAS SPECTACULAR.

Tickets are ON SALE and are $65.  Tickets may be purchased by calling (631) 261-2900, by visiting www.engemantheater.com, or at the Engeman Theater Box Office at 250 Main Street, Northport. Visa, MasterCard, Discover and American Express accepted.  To purchase Season Tickets and Gift Cards please contact the Box Office directly.  For group rates or to host an event at the John W. Engeman Theater, please contact the Group Sales Department at 631-261-2900.  For information on advertising in our Programs or in our Lounge, please contact the Advertising Sales Department at 631-261-2900.  The Theater is also home to the John W. Engeman Theater Studio of the Performing Arts, offering classes and camp programs for children for more information at 631-261-2900.

The John W. Engeman Theater at Northport is Long Island’s only year round professional theater company, casting our actors from the Broadway talent pool. From curb to curtain, we have made it our business to provide affordable, Quality Theater in an elegant one-of-a-kind location with outstanding facilities and extraordinary service. The renovated Theater offers stadium-style seating, state-of-the-art lighting and sound, a full orchestra pit, and a classic wood-paneled piano lounge with full bar.

For a complete show schedule and more information contact the theater directly at 631-261-2900, visit the box office at 250 Main Street, Northport or visit www.EngemanTheater.com