December 10, 2013 7:38 am | Filed under: Around Town,Arts & Entertainment,Holiday Season | Posted by: The Huntingtonian 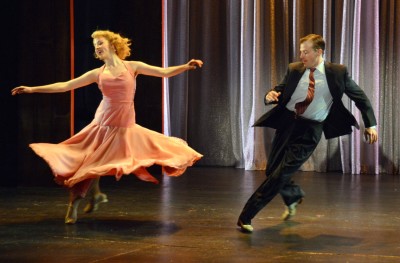 After 3 ½ years living in the Town of Huntington, I had not yet experienced the John W. Engeman Theater at Northport.  3 ½ years wasted.  Why?  Because the theater is absolutely a unique and fun experience to be enjoyed by all, children and adults alike.

From the FREE valet parking with very pleasant people to park your car to the luxurious and comfortable lounge with very comfortable seating to being greeted by the Theater’s General Manager and staff, it was absolutely delightful!  And that was just the beginning!

Entering the theater you almost forget that you are not on Broadway, but much closer to home at 250 Main Street in Northport.

There is not a bad seat in the house and, once seated, be prepared for a treat.  Non-stop singing, dancing and comedy for 2 ½ hours with a 20 minute intermission.

Irving Berlin’s “White Christmas” is always delightful, but under the direction of Mark Adam Rampmeyer this production is truly wonderful, filling all with the spirit of Christmas.

The entire cast was wonderful and very talented but I was especially impressed with the character of Martha Watson played by Kathryn Kendall who had us all laughing throughout the show. A close second was Mr. A Yup himself, Ezekial Foster, played by Stephen Valenti.

Young Susan Waverly, played by Katie Dolce, was terrific and has a bright future ahead of her.

By the time the show ended you will have experienced joy, camaraderie, laughter and tears and join the rest of the audience in a standing ovation.

I would strongly recommend that you call the ticket office at (631) 261-2900 and purchase tickets before they are all sold out!