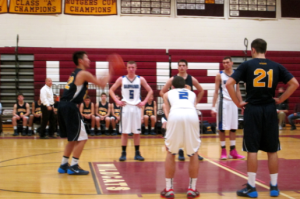 Wildcats 76-60.  Led by the prolific scoring and three point shooting capabilities of Chris McCullough (senior, shooting guard), ball handling and passing skills of Malcom Wynter (sophomore, point guard) the Harborfields Tornadoes were in control of the game from the opening tip-off.

To start off the game, the Tornadoes fired multiples shots from down town as they hit one three-pointer after another in the first quarter.  Harborfields head coach, Chris Agostino said he liked the way his team shot the ball and that they were all looking to attack from behind the three-point line.

In the second quarter, the strong interior play of Savion Black (senior, center) kept the Wildcats in the game as he battled for rebounds and tough points from inside the paint.  To close out the first half Travaun Patron (senior, guard) got hot by scoring on Whitman’s last three possessions, which included a thrilling three-point shot at the buzzer from far beyond the arc that fired up the home crowd.

After half time the Tornadoes recaptured the momentum and went on another run to open up the third quarter.  Doug Gaffney (senior, guard) got things started by raining down two three-pointers putting a damper on the Whitman crowd’s spirits.  Malcom Wynter went to work for Harborfields’ offense by crossing up Whitman defenders and making smart passes to his teammates.

Going into the fourth and final quarter Haborfields had a commanding 18-point lead.  The Wildcats did get help from their bench but were unable to make a dent into Harborfield’s lead due to their struggles at the free throw line.  McCullough and Tanner Morrow (senior, forward) continued to light up the scoreboard as they put the game away for the Tornadoes and went to capture the tournament championship.

All five of Harborfields starters finished the game with 10 points or more led by McCullogh who had 25 points on the night.  When asked about McCullough’s MVP performance Coach Agostino said that he believes McCullough is the best, most underrated player in the league but after this tournament people should finally start to notice how great of a player he truly is.