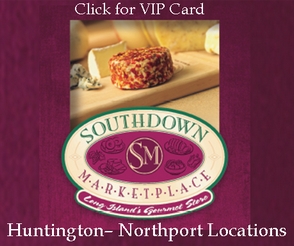 I have lived in The Town of Huntington for over three years now and whenever I went food shopping I just went to one of the national chains.  One in particular has a huge “FRESH” sign over the entranceway, so I thought, “well hey, I want fresh food!”  There was not a whole lot of food stores to compare with.

Well, I stumbled on an extraordinary food store located at 205 Wall Street in Huntington that had the name of “Southdown Marketplace.”

As I entered the store there was a gentlemen named “Joe” who was being very helpful to a number of patrons and had a big smile on his face which was contagious.  I asked him where the milk was and he brought me right to it.  I asked him how long this store has been here and his reply was “over 14 years.”  How could I have not heard of this place?  He went on to advise me that they have a second store that just opened in Northport.

Well being curious I took a drive to the new store located at 240 Fort Salonga Road in Northport and was truly impressed!  The store was having it’s Grand Opening in two days, so I made the decision to come back at that time.

Although it was snowing, the store had the Grand Opening and was packed with shoppers.  It was very clean and organized as was the Wall Street store, but there was a “newness” about it that you could just feel.  I was greeted by a young lady whose name was Grace Kelly (no kidding) and she was smiling from ear to ear with a warm and friendly demeanor making everyone feel welcome as they entered the store.  The first thing you see is the produce department with fresh produce, shiny apples and very colorful looking and fresh fruit.

As I walked through the store I was mentally comparing prices and all the items were very comparable to the other food stores in town.  Although Southdown Marketplace fancies itself as a “Gourmet Store,” which would normally make you think “expensive,” that was clearly not the case.

As I wandered through the store picking up an item here and there I soon realized that almost every aisle had a table with samples of the merchandise along with bright and smiling employees encouraging you to try it!  The Imperial Chorizo table had spicy and mild chorizo sausage. WOW!  Then there was a coffee urn with different cookies and desserts, and another table with different cheeses to sample and another with breads and deli items and another and another!

It was incredible.   I came in hungry and was filling up fast!

Southdown Marketplace has another specialty to be proud of and that is their “Grab and Go” feasts which are over 80 different types of entrees, sides, soups, salads and complete meals that are ready to heat and serve.  Busy all day at work and having trouble coming home to fix a nice home cooked meal for your family?  Well stop at Southdown Marketplace  and pick up gourmet salads, oven ready meatloaf or some of dozens of prepared foods ready to throw in the oven.  “Honey set the oven at 350 degrees, I stopped at Southdown and am bringing home dinner!”

Before you go anywhere else, you MUST checkout these fine stores for yourselves.  You will be thanking me for recommending them!