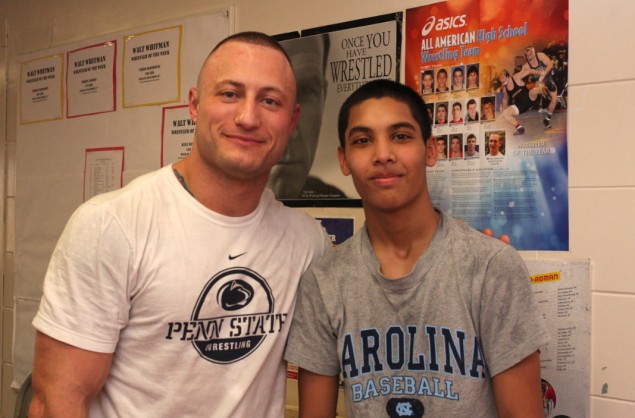 Wrestling is a sport of physical toughness and agility, combined, on occasion, with psyching one’s opponent out a little. A wrestler gets to stare across the mat at his opponent and begin a preliminary round of assessing who looks the toughest. “I was pretty nervous when I first saw the guy I had to wrestle,” said Walt Whitman wrestler Justin Grose. “But I knew immediately what to do and how I wanted to approach the match.”

“Justin and I talked before he faced his opponent, and I told him, win or lose, there is always another match. And I reminded him to be grateful for the opportunity,” said Whitman JV Coach Chris Cardella. “We teach our guys about sportsmanship and about winning and losing graciously,” added Coach Cardella. “But the sportsmanship Justin displayed clearly came from his heart and his home.”

Justin was facing his second match of the tournament and was paired up against Dante Robinson of Bellport. “When you’re faced with the kind of situation that Justin was, the way you respond really says as a lot about your personality and your character,” said Whitman’s Varsity Head Coach Vincent Altebrando.  “Justin is obviously a kid who has strong values, and he took it upon himself to do what was right even though it meant a loss.”

Dante Robinson, wrestling in Bellport’s 120-pound weight class, came out for the team over a year ago, and even though he has never won a match, or even come close, he has never missed a day of practice.  Dante Robinson has cerebral palsy and cannot walk. “I knew immediately that I wanted him to win,” said the Whitman freshman, now in his second year of wrestling. “I didn’t give it a moment’s thought, I just knew I wanted Dante to win.”

The crowd at the tournament knew the significance of this match, and all eyes were fixed on the two wrestlers. The match began with Justin “allowing” Dante a takedown, and both athletes continued wrestling. “I told Justin to make it competitive,” said Coach Cardella. “So then Justin took him down, and they kept it competitive until Dante was able to throw on a half-nelson and pin Justin. “The reaction from Dante was priceless,” said Bellport Wrestling Coach Chuck Maragioglio. “The act of kindness by the Whitman wrestler and their coaches was a clear reminder of why we do what we do.”

South Huntington Athletic Director Dr. Jim Wright couldn’t agree more. “Justin displayed some of the best sportsmanship we have ever seen in any sport,” said Dr. Wright. “The crowd gave both young men a standing ovation, and the Bellport wrestler, with tears in his eyes, said, ‘I finally did it.’ It was an awesome moment, one that the young man will never forget.”

Justin Grose did have another match that day, but he had a whole new fan base, as Dante Robinson and his fellow Bellport wrestlers gathered around the mat to cheer him on. Dante shouted encouraging words to Justin, and he could easily be overheard saying to his teammates, “I feel so great today.”