Anything But Silent Halloween Edition 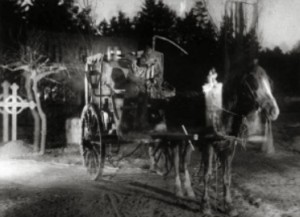 This chilling ghost story is one of the most central films in the history of Swedish cinema. “The Phantom Carriage” stars and is directed by Victor Sjöström (Wild Strawberries) and based on a novel by Nobel Prize winner Selma Lagerlöf. This extraordinarily rich and innovative silent classic (which inspired Ingmar Bergman to make movies) is a Dickensian ghost story and a deeply moving morality tale, as well as a showcase for groundbreaking special effects. It screens with live organ accompaniment by Ben Model in the popular Anything But Silent series on Tuesday, October 28 at 7:30pm at Cinema Arts Centre, 423 Park Ave., Huntington, NY. 631-423-7611 www.CinemaArtsCentre.org

Members $10 / Public $15. Tickets can be purchased online, www.CinemaArtsCentre.org  or at the box office during theater hours

The last person to die on New Year’s Eve before the clock strikes twelve is doomed to take the reins of Death’s chariot and work tirelessly collecting fresh souls for the next year. So says the legend that drives The Phantom Carriage (Körkarlen), directed by the father of Swedish cinema,Victor Sjöström.

BEN MODEL is one of the USA’s leading silent film accompanists, and has been playing piano and organ for silents at the Museum of Modern Art in New York for the past 27 years and at the Cinema Arts Centre for over 6 years. Ben co-curated MoMA’s “Cruel and Unusual Comedy” series and Roscoe “Fatty” Arbuckle retrospective, and also curated Shout!Factory’s new “Ernie Kovacs Collection” DVD box set. A five-time recipient of the Meet The Composer grant, Ben is a regular accompanist at classic film festivals around the U.S.A. and in Norway, and performs at universities, museums, and historic theaters. Ben is the producer and co-founder of The Silent Clowns Film Series, now in its 14th season in NYC. Ben’s recorded scores can be heard on numerous DVD releases from Kino Video and others. Ben’s composed ensemble scores for films by Chaplin, Keaton and Lloyd are performed around the U.S. every year by orchestras and by concert bands.