Supervisor Frank P. Petrone and members of the Huntington Town Board marked Arbor Day 2017 Saturday April 22 by joining with students and administrators from the Huntington and Harborfields School Districts in planting a tree in Heckscher Park, one of 100 to be planted this year in honor of the park’s 100th anniversary.

Joining Supervisor Petrone and Board Members Mark Cuthbertson, Susan A. Berland and Tracey A. Edwards were Huntington schools superintendent James Polansky, Harborfields superintendent Dr. Francesco Ianni, students from their high schools and members of Girl Scout Troop 1632 from Huntington. After helping Town officials plant the a tree in front of the cottage at the park, the high school students planted 50 native bare root saplings throughout the park. 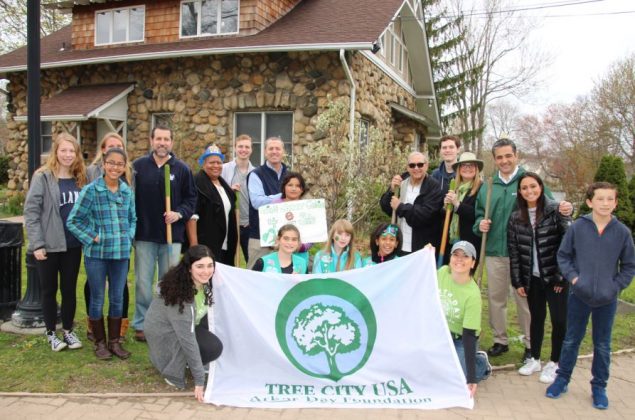 The ceremony was held in conjunction with the Town’s annual Earth Day Expo, during which the Town also distributed 200 native bare root saplings to residents courtesy of the National Wildlife Federation. During the last three years the Town has given away 750 saplings to Town residents thanks to the National Wildlife Federation’s Trees for Wildlife program.  The Town has also completed various tree plantings in parks and planted many street trees along Town rights-of-way.

For the 19th consecutive year, the Town has been given Tree City USA status, a designation from the National Arbor Day Foundation, awarded through the state Department of Environmental Conservation. For the past three years, the Town has completed additional tree related activities and as a result received a Tree City Growth Award each year. The Growth Award highlights innovative programs and projects as well as increased commitment of resources.

As part of the commemoration of the park’s 100th anniversary, 40 native trees, 2 ½ to three inches in caliper, were planted in the past two weeks. An additional 60 are scheduled to be planted in the Fall.