Harborfields High School seniors were recently recognized for their outstanding achievements, citizenship and service at the school’s annual senior awards ceremony. In addition, more than 20 memorial and organizational scholarships were presented to deserving seniors.

Casandra Moisanu and Ishaan Lohia were announced as the Class of 2017 valedictorian and salutatorian, respectively. Principal Timothy Russo commended the seniors for their academic dedication and contributions to the school community. Russo also announced the eight other outstanding students who make up the top 10 students in the graduating class.

The following are the top 10 students in the graduating Class of 2017: Casandra Moisanu, Ishaan Lohia, Greta Browne, Sarah Murphy, Mia Santomauro, Alexander Martin, Falyn Dwyer, Olivia Madigan, Jacob Chalif and Donovan Snyder. Their names were added to the Wall of Scholars, which is affixed in the hallway of the high school. 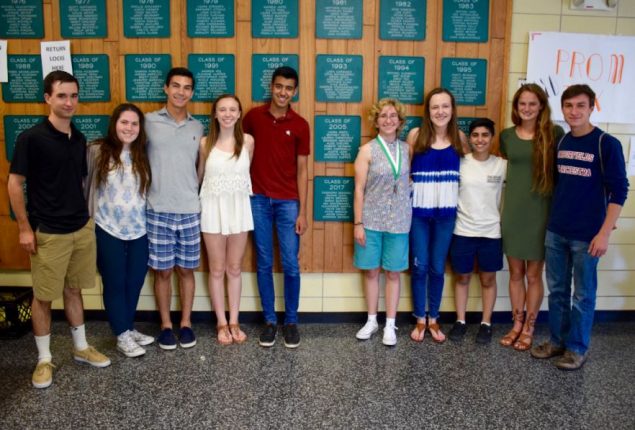 Photo Caption: Harborfields High School’s top 10 students of the Class of 2017 gathered around their new plaque on the school’s Wall of Scholars.