Huntington Supervisor Frank P. Petrone, joined by Town Council members, the Town’s Veterans Advisory Board and members of veterans’ groups, unveiled a plaque October 19 describing the history of the a large American flag that hangs at the Town’s Dix Hills Ice Rink.

The flag, which was presented to the Town about 10 years ago by now-retired U.S. Army Lt. Col. John C. Bivona Jr., flew over Kirkuk Regional Air Base in Kirkuk, Iraq, and survived rocket and mortar attacks during the Iraq War.

The flag has been on display in the ice rink since the opening of the new portion in 2010. Since then, at hockey games and at skating competitions, people have faced the flag and either said the pledge or stood for the national anthem.

The Town always intended to have a plaque commemorating the donation, given its unique history, but waited until Lt. Col. Bivona left the service and returned to Long Island so he could be present at its unveiling. The Town worked with the Veterans Advisory Board on the plaque, which was paid for through donations to the Town Veterans Fund. 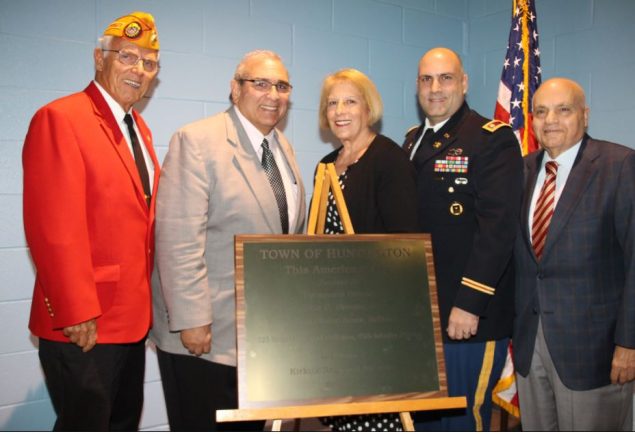