Huntington Supervisor Chad A. Lupinacci joined the Half Hollow Hills Board of Education January 8, 2017 in recognizing three district students who won the $100,000 team grand prize in the prestigious Siemens Competition in Math, Science and Technology.

The three juniors —   Jillian Parker of High School West, and Arooba Ahmed and Jiachen Lee of High School East – defeated more than 2,000 competitors from across the country to win the prize at the finals held at the George Washington University in Washington, DC, in early December. Their breakthrough research on how a specific protein is involved in the process of cell division could potentially help find treatments for three different types of diseases: cancer, neurodegenerative diseases like Huntington’s and Alzheimer’s, and also infectious diseases.

“Winning this prize is a truly remarkable accomplishment,” said Supervisor Lupinacci, who presented the three students with proclamations noting their achievement. “Just as remarkable will be when their research leads to treatments for serious illnesses and we can say that the kernels of those treatments began in Half Hollow Hills science labs. I congratulate Jillian, Arooba and Jiachen, and look forward to their future success.” 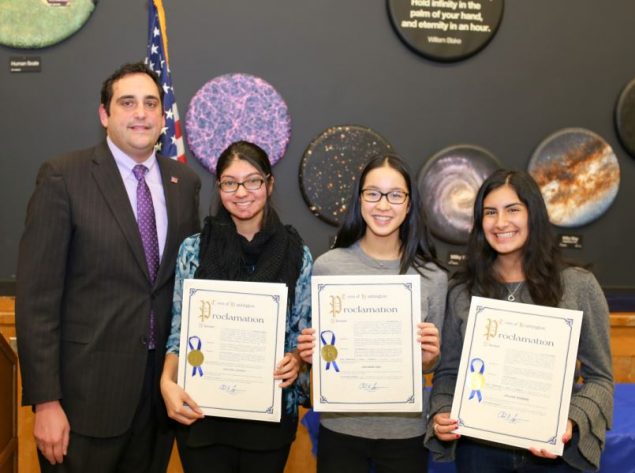