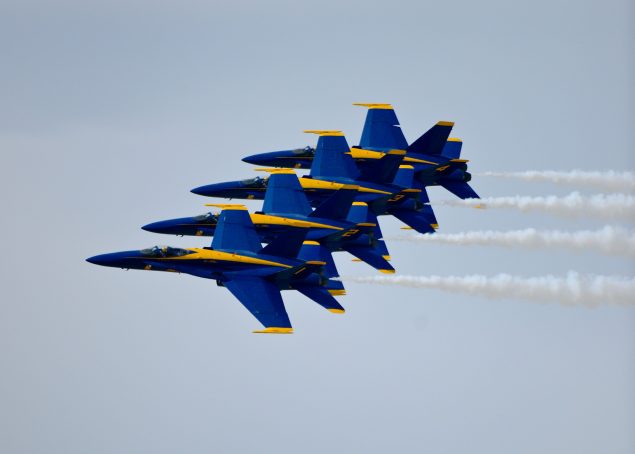 It was also announced today at the International Council of Air Shows (ICAS) Convention that the Royal Canadian Air Force Snowbirds will also be performing, making their 4th appearance at the Bethpage Air Show; the United States Army Golden Knights Parachute Team will also be participating in the 2018 lineup, and the F-22 Raptor, a stealth tactical fighter aircraft developed for the United States Air Force will perform. An additional announcement was also made that the Bethpage Air Show at Jones Beach, one of the largest and most respected air shows in the country which is ranked in the Top 5 by industry experts, was named one of four air shows to be featured in the inaugural 2018 “Grunt Style Air Show Majors Tour.”  The tour unites the most prestigious air shows in the country and was developed to help increase mainstream awareness of the air show industry.

This will be the U.S. Navy Blue Angels’ 8th appearance as headliners at the show.  During the squadron’s most recent headlining appearance in 2016, the Bethpage Air Show had record breaking attendance when 453,000 people traveled to the show for its biggest lineup ever.

“We are excited to welcome back the United States Navy Blue Angels to Long Island.  This year we will be celebrating our 15th anniversary.  Since the show began in 2004, over 4 million air show enthusiasts have attended the Bethpage Air Show at Jones Beach, helping to celebrate our nation’s military and the Memorial Day holiday weekend.  We look forward to another spectacular show this May,” said George Gorman, Deputy Regional Director, New York State Office of Parks, Recreation and Historic Preservation.

“Two years ago, when the Blue Angels last headlined our show, we had record breaking attendance with 453,000 spectators.  We are confident that their return to Long Island in 2018 will draw an equally large crowd. We are also extremely proud to be a part of the Air Show Majors tour which unites the most significant air shows in the country,” said Linda Armyn, Senior Vice President of Corporate Affairs, Bethpage.

“The Bethpage Air Show at Jones Beach has continuously produced one of the top shows in the country every Memorial Day weekend,” says Scott Howard, Chief Marketing Officer at Red Frog Events, creators of the Grunt Style Air Show Majors tour. “We look forward to working alongside the team at Jones Beach to enhance the air show industry and showcase the Bethpage Air Show as a destination for aviation enthusiasts from around the world.”