The Day the Sheriff Came to Commack

It was a first for Commack Middle School when newly elected Suffolk County Sheriff Errol Toulon Jr.  came to town. Thanks to his friendship with a Commack family, the Catuoscos, whose son showed his social studies teacher a coin from the Sheriff’s inauguration, the wheels were set in motion for this special visit. 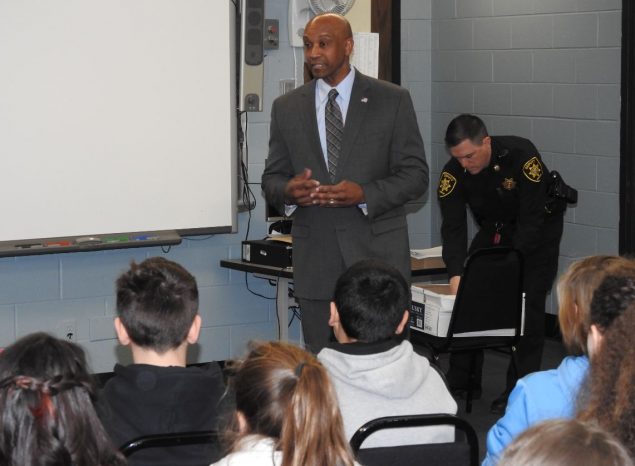 Sheriff Toulon met with Commack Middle School teacher Christine Mankes’ social studies classes on January 25, 2018. He explained the responsibilities of the Sheriff’s office, and talked about his 53 day campaign when the person originally running for office bowed out. He impressed upon the students the importance of helping others and making the right choices. Sheriff Toulon told them to “Protect each other and let someone know if there’s something wrong.” He expressed his concerns about opioids and bullying, and vowed to keep people safe in their schools and in their neighborhoods.

The Sheriff answered all the student and staff’s questions in a personable and friendly way, and plans to visit middle schools throughout the county during his four year term. Thanks to Sheriff Toulon and Deputy Sheriff Rich Tedesco for taking time out of their busy schedules to speak frankly to our teens and pre-teens.