Middle School’s Global Collaboration to Save the Animals

May 14, 2018 8:41 am | Filed under: Commack,Commack School District,Events,Hamlets,News | Posted by: The Huntingtonian Staff

“The House of Representatives is considering a bill that would eliminate Endangered Species Act protections for species that are not native to the United States.

This would seriously undermine the United States’ ability to fight wildlife crime and the illegal wildlife trade threatening some of the world’s most imperiled species – like tigers, elephants, and rhinos.”- World Wildlife Fund

Teachers Grace Barrett, Lauren Sturchio, and Maria Quinn, along with students in seventh and eighth grade English classes and Creative Connections, an art elective, hope to raise awareness into the part that human action plays in the destruction of animal species on our planet. As creative advocates for these animals, the students used their voices and artistic skills to communicate their message through poetry and paintings, and published a book called Restoring Voices.

The motivational goal was to educate and raise awareness of endangered and threatened species.  They began by highlighting ten species from Long Island, USA.  They expanded their focus to include ten such species from Costa Rica, Central America. By comparing these two regions, they concluded that while there are cultural differences and challenges that each region face, the struggles of their wildlife is extremely similar. The students are eager to learn more about other global communities, especially Costa Rica so that together they can work towards positive changes for these animals for the future. 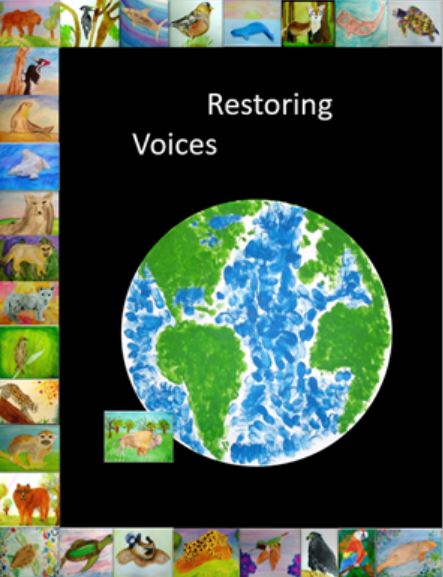 The book consists of two parts. The first shares poems written in English with Spanish translations about ten species from Long Island. The second part moves on to ten species the students selected from Costa Rica. After each poem and translation, you will find a startling fact that provides insight into the unique struggle of each species.

Mrs. Barrett traveled to Costa Rica over the February break and presented the book to students in the Lincoln School in Heredia, Costa Rica. Lincoln is an international IB school that is seeking MYP status. Restoring Voices is an example that shows an MYP unit that includes statements of inquiry utilizing a global issue integrating English, world language, and visual art to communicate a message to an audience.

If you’d like to purchase a book, please visit: www.lulu.com, and search for Restoring Voices. Proceeds from the book will support Alturas Wildlife Sanctuary in Costa Rica, which rehabilitates and nurtures wildlife with the hope of releasing the animals back to the wild.

With these positive actions moving forward, we can truly restore voices.