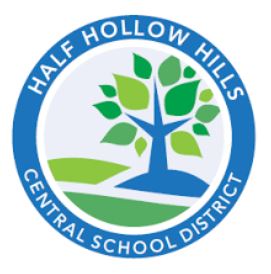 Half Hollow Hills is proud to announce that both Hills East and Hills West were ranked in the top 5% of high schools in the nation in the 2019 U.S. News & World Report Best High Schools rankings! The rankings include data on over 23,000 high schools nationwide, and rank 17,000 schools on six factors that are based on their performance on state assessments and how well they prepare students for college. #HHHCSD

·         Congratulations to our students in the Hills East & West DECA clubs who competed against 22,000 DECA students from around the world at the ICDC International Competition in Orlando, FL. East’s Sari Strizik won a medal for placing Top Ten In The World in her category of Marketing Communications, and was an ICDC Finalist, with an excellent performance on the exam and three role plays! #HHHCSD

·         Half Hollow Hills is proud to announce that a combined nine students from High School East and High School West have qualified for the Intel International Science and Engineering Fair (ISEF) in Phoenix, Arizona. Those nine students represent the most from any district in New York State that can compete at ISEF, which is the world’s largest international pre-college science competition. The students qualified to go to the international competition by placing high enough at the Long Island Science and Engineering Fair or New York State Science and Engineering Fair. Their projects tackle problems like identifying a novel target for anti-viral therapeutics, creating a mathematical model of rumor/information spread, and detecting that an FDA approved cancer therapy causes increased migration (metastasis) of tumors. #HHHCSD

·         Congratulations to Half Hollow Hills Mandarin Chinese Teacher Jennifer Wu-Pope on being one of 26 teachers in the nation selected to conduct research abroad as part of the U.S. Department of State’s Fulbright Distinguished Award in Teaching Semester Research Program! Recipients of Fulbright grants are selected on the basis of academic and professional achievement, as well as demonstrated leadership potential. #HHHCSD

·         Congratulations to Hills East’s Rinni Bhansali and Daniel Salkinder on competing in this year’s American Invitational Mathematics Exam (AIME). Students must be invited to participate in this contest based upon performing within the top 5% of all scorers on the previous American Mathematics Competition (AMC). The AIME tests students on advanced problem solving concepts where they have to apply their mathematical knowledge in non-routine scenarios. #HHHCSD

·         Hills East’s Andrew Menkes and Dylan Keskinyan developed an interactive Periodic Table that is capable of listing element data and bonding patterns between different atoms. They wrote this sophisticated Java program as part of their “Creative Chemistry” project. #HHHCSD