The Intersection of Route Commack Road and Motor Parkway

Please plan to join us Wednesday May 15 to hear from Mrs. Stacy Colamussi the Republican candidate for Receiver of Taxes for the Town of Huntington. Presently, Mrs. Colamussi is the Deputy Town Clerk for Huntington. She will be discussing the statutory duties of the Received of Taxes and what she plans to bring to the office. 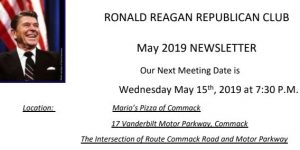 For example, the MTA spent $800 million on their headquarters. It costs the MTA $2.7 billion to build a mile of subway. In Atlanta a mile of subway costs $120 million. The new MTA labor contract provides for a 17% raise over 6 years yet did not get any appreciable cost savings to offset the additional costs. Yet New York wants to implement congestion pricing for NY City with the money going to the MTA. There is an MTA commuter tax, all the people who live or work in the ten counties in and around New York City, even if they don’t use any MTA service. These MTA taxes on residents in the 10 counties was over $2.5 billion last year.

Suffolk county is in poor fiscal shape. During Steve Bellone’s tenure the county bond rating was lowered 7 times due to poor fiscal leadership. During Steve Levy’s tenure as County executive the Suffolk bond rating was raised 7 consecutive times. This shows what good fiscal management can do. IT is not a revenue problem , it is a spending problem.

Mr. Levy attributed the current gang problem in Suffolk to Federal immigration policy as well as the Bellone Administration refusal to work and cooperate with the FBI, resulting in the murder of 20 kids.

Mr. Levy did discuss several good changes in the legislation that make it a bit easier to live in ?New York. Mr. Levey is now a writer for both FoxNews.com and NewsMax.com

The Club is grateful to Mr. Levy for the interesting and lively discussion.

Thank you to all those that made this year’s Gipper Award dinner a success.

The Ronald Reagan Republican Club is grateful to Mario’s Pizza, a longtime supporter of the Club, to allow the Club an alternate location for our meetings.

Please give us any comments you may have about our monthly meetings. We value any comments as they can help us serve the membership better.

Please plan to join us at our monthly meetings held on the third Wednesday of the month. Please feel free to contact me (Peter Kelly) at 516-319-4467 should you have any comments or questions.