May 13, 2019 4:14 am | Filed under: Crash,Events,Huntington,News,Police/Fire/EMS | Posted by: The Huntingtonian Staff 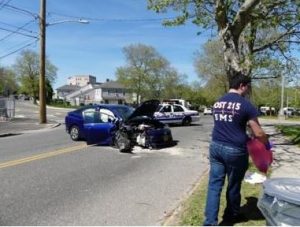 A 2016 Toyota sedan driven by a 32 year old male struck a tree near the Huntington Community First Aid Squad (HCFAS) headquarters Saturday. The vehicle was eastbound on Railroad Street near the intersection of Loundes Ave.at approximately 2:30 PM when the driver struck a tree on the west side of the road.  He self -extricated but suffered a laceration to his head and upon further evaluation by the ambulance crew he appeared disorientated. Due to the nature of the accident and the injuries incurred by the driver it was decided to transport him to Nassau University Medical Center, a Level One Trauma Center.

Huntington Manor FD was on scene to spread Speedy Dry on fluids that had leaked on the road.