July 19, 2019 12:52 pm | Filed under: Arts & Entertainment,Concerts,Events,Hamlets,Heart of the Community,Huntington,News | Posted by: The Huntingtonian Staff

Grammy Award-winning singer-songwriter Loudon Wainwright III headlines the 14th Annual Huntington Folk Festival on Saturday, July 27, 2019, at Heckscher Park, located off Main Street (Route 25A) and Prime Avenue, in Huntington, NY. Opening for Wainwright on the park’s [Harry] Chapin Rainbow Stage at 8 p.m. that evening will be his daughter, Lucy Wainwright Roche. Extending from 11 a.m. to 10:30 p.m., with a dinner break from 6-8 p.m., the free event – co-presented by the Folk Music Society of Huntington and the Huntington Arts Council – is part of the 54th Huntington Summer Arts Festival.

Few songwriters have laid out their lives in song as graphically as Loudon Wainwright III, a 2010 Grammy Award-winner (Best Traditional Folk Album) for High Wide & Handsome: The Charlie Poole Project (with two previous Grammy nominations for I’m Alright in 1985 and More Love Songs in 1986). The singer-songwriter, humorist and actor is, perhaps, best known for his 1972 novelty song “Dead Skunk (in the Middle of the Road).” Maintains Stephen Holden of The New York Times: “Mr. Wainwright has proved to be far and away the most candid diarist among the singer-songwriters who … brought confessional poetry into popular song…”

Prior to the evening concert, Michael Kornfeld, president of the Folk Music Society of Huntington and editor & publisher of AcousticMusicScene.com, will host a series of song swaps from 12-6 p.m. These will take place near a canopy tent on the upper lawn area overlooking the stage and will feature more than 30 artists/acts from half-a-dozen states and a Canadian province. Unlike the unplugged showcases of previous years, these will be amplified. The day’s musical festivities begin with an open mic-song circle at 11 a.m.

The complete schedule for the Huntington Folk Festival appears below and also will be posted online on AcousticMusicScene.com, FMSH.org and HuntingtonArts.org.

4:00 A Trio of Duos: Belle of the Fall, The Levins, Catherine Miles & Jay Mafale

Festivalgoers are advised to bring lawn chairs and blankets and a picnic supper (or they can walk into Huntington Village and enjoy a meal at one of its many restaurants).

The Huntington Folk Festival is part of an extended folk and Americana weekend at Heckscher Park. Long Island talent will be spotlighted on Thursday night, July 25, with a shared bill featuring folk-harmony trio Gathering Time and singer-songwriter Christine Sweeney. On Friday night, July 26, the Crys Mathews Trio will grace the stage. Although both concerts are set for 8 p.m., Kornfeld will conduct a 7:15 p.m. special on-stage interview-conversation with Matthews, the grand-prize winner in the 2017 NewSong Music Performance & Songwriting Competition. Crystal Bowersox – a rising star whose influences span across folk-pop, classic rock, soul, blues and country – closes out the weekend on Sunday night.

The Huntington Summer Arts Festival is produced by the Town of Huntington, presented by the Huntington Arts Council, and sponsored in part by the New York State Council on the Arts, the County of Suffolk and Canon U.S.A. 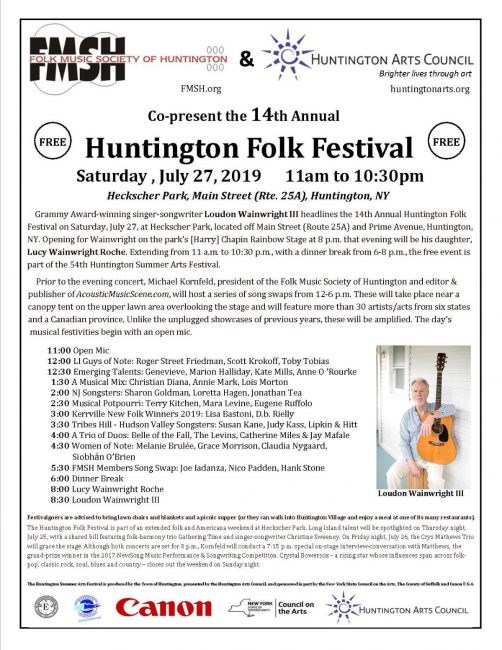