“NYU Long Island School of Medicine is the realization of a bold vision to make medical school attainable—without financial hardship—to attract the brightest and best students from diverse walks of life into the medical profession,” said Andrew Hamilton, President of New York University. “Our inaugural White Coat Ceremony is an important milestone as our new students’ journey toward becoming outstanding primary care physicians who we hope will one day serve the regional area.”

NYU LISOM received over 2,400 applications for the 24 available slots this year. It has already begun recruiting for next year’s class, which will include 32 students. The year following, the class size will expand to 40 students and be capped at that number in subsequent years.

The inaugural White Coat ceremony included each of the 24 new students reciting a version of the Hippocratic Oath— acknowledging their commitment to serving humanity with honor, compassion, and dignity, after which a white medical coat was draped upon each students’ shoulders. The event took place at the Mineola campus of NYU Winthrop Hospital, in a beautiful, new contemporary-designed space. During the ceremony, students were surrounded by family and friends, as well as school leadership and faculty. 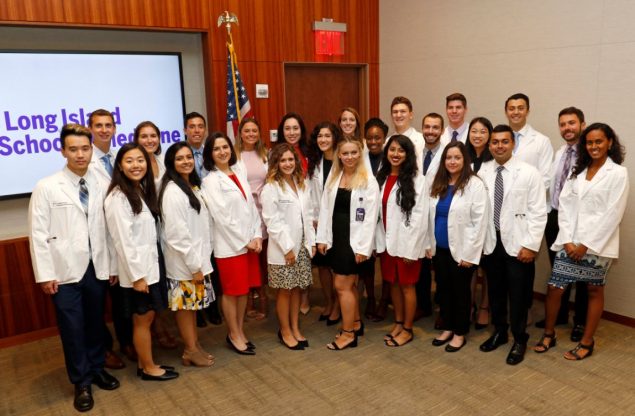 NYU Long Island School of Medicine is the second to open under the auspices of NYU. Additionally, full-tuition scholarships were offered to all students at NYU LISOM, regardless of merit or financial need. The new school’s curriculum, with its primary-care focus, will concentrate on internal and community medicine, pediatrics, OB/GYN, and general surgery, as compared to more traditional four-year schools that tend to focus on other specialties. All students are offered a conditional acceptance to an NYU Winthrop Hospital residency slot upon matriculation; it is believed that NYU LISOM is the only school in the nation to offer such a conditional guarantee.

“In the decade ahead, there is expected to be a significant shortage of primary care physicians nationwide, NYU LISOM hopes to inspire its graduates to help fill that void in the New York metro area and on Long Island,” said Dr.  Steven Abramson. NYU LISOM also offers an accelerated three-year curriculum, allowing physicians to get into the field of their choice earlier, during their most productive years, and with less debt. “The tuition-free initiative, along with the three-year curriculum, are critical milestones in transforming medical education and addressing the dramatic changes in the healthcare delivery system,” says Dr. Abramson.

To sustain its full-tuition scholarship initiative, NYU LISOM will follow the landmark model created at NYU School of Medicine when it became the first major medical school in the U.S. to offer full-tuition scholarships to all enrolled MD program students. The NYU School of Medicine initiative is supported by philanthropy; NYU LISOM will adopt the same approach to fund its students.

The incoming students at NYU LISOM come from all over the country including the Tri-State Area (including one from Mineola) to Pennsylvania, Massachusetts, Michigan, Oregon, and beyond; and from top universities including Harvard, Duke, Vassar, and NYU, as well as schools in the SUNY system—including Binghamton and Stony Brook.Nine incoming students are male and 15 are female, the latter including two nurses (one of which is a U.S. Air Force veteran) who decided to become physicians. Students come from all different backgrounds; one shared a story about how her Nigerian parents inspired her to become a primary care physician so that she could give back.

“The students in our inaugural class are among our physician leaders of the future, and many overcame remarkable odds to get where they are today,” said Dr. Steven Shelov. “We’re proud to be stewarding them toward their goals of becoming primary care physicians. Our exceptional clinical curriculum will be further enhanced by very strong mentorships from school leadership and faculty.”