On Tuesday, September 3,  2091 the Town of Huntington denounced the painted anti-Semitic graffiti vandals left at Sunshine Acres Park on Townline Road in Commack over the holiday weekend and urged residents to report suspicious activity and instances of hate to the Town.

“The swastika is symbol meant to threaten and intimidate and this demonstration of hate will not be tolerated in the Town of Huntington,” said Supervisor Chad A. Lupinacci, who visited the park on Monday, September 2, 2019 to be briefed by Director of General Services, Andre Sorrentino, whose staff temporarily painted over the graffiti with green paint on a paved path over the Labor Day holiday weekend until they would be able to permanently sealcoat the area.

They were joined by Public Safety security guard Dan Froehlich, who was patrolling the trail in the park and informed the Supervisor that he has personally broken up groups of young people loitering in the park.

The Security Division of the Department of Public Safety is responsible for the daily patrol of 77 Town facilities, consisting of buildings, properties, beaches and parks, as well as railroad stations and surrounding parking facilities located within the Town. The Town’s Park Rangers are New York State Certified Peace Officers tasked with keeping the general public order and protecting Town parks, beaches, and other facilities.

Residents can report instances of hate or bias to the Town’s Anti-Bias Task Force through their Town Department of Human Services liaison, Department Director Carmen Kasper at humanservices@huntingtonny.gov or at (631) 351-3304. 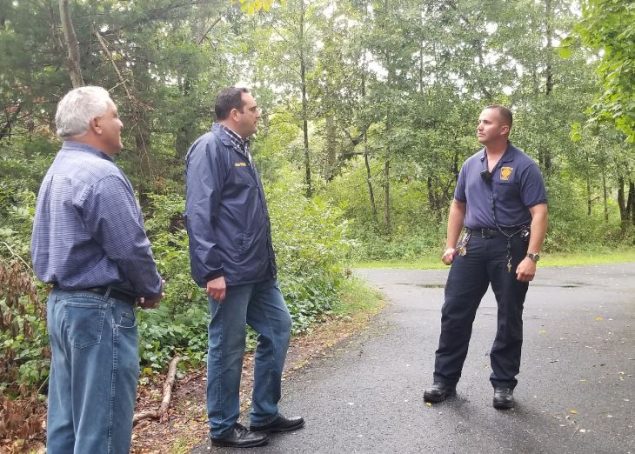