October 3, 2019 6:51 pm | Filed under: Arts & Entertainment,Centerport,Concerts,Events,Hamlets,Heart of the Community,News | Posted by: The Huntingtonian Staff 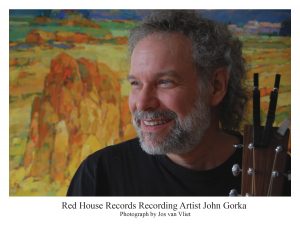 John Gorka, an acclaimed contemporary America singer-songwriter, opens the Folk Music Society of Huntington’s 2019-2020 season of First Saturday Concerts on October 5, 2019. The 8:30 p.m. concert at the Congregational Church of Huntington (30 Washington Drive, off Route 25A, Centerport) is preceded by an open mic at 7:30 p.m. Tickets, priced at $30 ($25 for FMSH members) may be purchased online at www.fmsh.org using a credit card or at the door (cash and checks only). For more information, visit the website or call (631) 425-2925.

Since emerging more than three decades ago as a winner of the prestigious Kerrville New Folk Competition in the Texas Hill Country, the New Jersey-bred and now Minnesota-based baritone has become a world-renowned songwriter and performer who writes universal but personal songs with a touch of humor. Early on in a career that is still going strong, Rolling Stone magazine called John Gorka “the preeminent singer-songwriter of what has been dubbed the New Folk Movement.” He’s recorded and released 14 albums.

The New York Times has lauded his “fresh lyrics, a stunning emotional baritone, and his twisted humor” that have endeared Gorka to fans the world-over, while such notable artists as Mary Black, Mary Chapin Carpenter, Eliza Gilkyson, Nanci Griffith and Maura O’Connell also have covered his songs.

Founded in the late 1960s, the Folk Music Society of Huntington is a nonprofit organization that presents two monthly concert series, a monthly folk jam, and an annual folk festival in conjunction with the Huntington Arts Council.