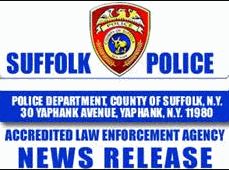 Suffolk County District Attorney Timothy D. Sini today announced the results of an almost two-year-long investigation that resulted in one of the largest takedowns of MS-13 gang members and associates in U.S. history.

The intelligence gathered during the course of the investigation, which included court-authorized eavesdropping by the Suffolk County District Attorney’s Office on approximately 215 phone lines, contributed to the arrest of more than 230 MS-13 gang members worldwide.

In Suffolk County alone, the investigation has netted criminal charges against 96 MS-13 gang members and associates and has thwarted seven alleged murder plots by charging defendants for conspiracies to commit murder. These charges include a Special Grand Jury indictment unsealed this week charging 45 MS-13 gang members and 19 associates for alleged murder conspiracies, drug trafficking, weapons possession and sales, gang violence, and other offenses.

“As a result of this investigation, we have brought charges against 96 defendants, including the leaders of nine cliques operating in Suffolk County,” District Attorney Sini said. “This operation helped create an environment which led to the ending of the New York Program, which was orchestrated by the leadership of MS-13 in El Salvador to develop a greater presence on Long Island. Additionally, as a result of reliable intelligence developed by this investigation, law enforcement has prevented countless acts of violence over the past two years, including seven murder plots.

“Our message is simple: to the residents of Suffolk County, we will do what it takes to protect our communities; not one of us should have to live amongst these ruthless gang members,” District Attorney Sini said.  “To MS-13: we are coming for you.”

“Today’s arrests close the book on MS-13’s attempt to build an arsenal of brutality on the East Coast,” said DEA Special Agent in Charge Ray Donovan. “For over two years, a wiretap investigation provided critical insight into MS-13’s goals of recruitment, expansion, brutality, violence and rule.  This tool resulted in hundreds of MS-13 related arrests in NY, El Salvador and Baltimore; thwarted murders, robberies, beatings; and helped locate three murder victims’ remains. I applaud the dedicated work by law enforcement whose collaboration between districts is unsurpassed. This announcement is a message to MS-13 leaders in El Salvador and LA that New York will not be your home.” Special Agent in Charge would like to praise Suffolk County District Attorney’s Office, Nassau County District Attorney’s Office, DEA offices in Baltimore, Houston, San Salvador, Honduras, Guatemala, and Special Operations Division, as well as the invaluable collaboration with DEA’s federal, state, local law enforcement partners on this unprecedented investigation.

“The incredible number of arrests and indictments in this case is a testament to the unwavering resolve law enforcement has to rid our communities of the violent MS-13 gang,” said Peter C. Fitzhugh, Special Agent in Charge of HSI New York. “Not just MS-13, but all transnational gangs who operate with impunity in Long Island, are put on notice. Law enforcement will continue to investigate, arrest and seek prosecution for their brutal criminal acts.”

“Today’s announcement is the capstone on a multiyear coordinated multi-agency investigation into the MS-13 street gang. Members of this gang are being charged with illegal narcotics trafficking, weapons possession and violent acts along with a host of other charges. ATF stands with all of our local, state and federal partners in the fight against violent crime. We will continue to excise these violent street gangs from our communities until no one is in danger from the mayhem they bring. I would like to thank all of our law enforcement partners that put their diligent efforts into this investigation. I would also like to thank the Suffolk County District Attorney’s Office for their work in prosecuting the case,” said John B. Devito, Special Agent in Charge of the Bureau of Alcohol, Tobacco, Firearms and Explosives’ New York Field Division.

“Every community on Long Island and around the state deserves to live in peace, and this MS-13 takedown is a major step toward that goal,” Attorney General Letitia James said. “I commend DA Tim Sini and all of our partners in this investigation. Our office is proud to have played a role in this ongoing fight to advance the cause of justice and safety in neighborhoods around New York State.”

State Police Superintendent Keith M. Corlett said, “I commend the diligent efforts of all the partners involved in this case, who have worked tirelessly to combat this dangerous gang. These arrests send a strong message that we will not tolerate those who bring illegal drugs, fear and violence to our communities, and we vow to continue this fight on all fronts.”

“MS-13 gang members act with depravity and no regard for the victims that they prey upon. Their violence has no bounds, which is why investigations like this one are so critical,” Suffolk County Police Commissioner Geraldine Hart said. “As a result of this unprecedented collaboration, we have not only saved lives and removed narcotics off our streets, we have decimated cliques struggling to rebuild.”

“This is one of the most significant and far-reaching takedowns of MS-13 and its associates to date, and further decimates their ability to terrorize Long Island communities, recruit new members and distribute deadly drugs on our streets,” Suffolk County Sheriff Dr. Errol Toulon, Jr. said. “I appreciate the role of Sheriff’s Office investigators in this collaborative effort, and congratulate all of the federal, state and local law enforcement partners for their persistent and tenacious pursuit of these dangerous criminals.”

“The entire law enforcement community on Long Island is working day and night to eradicate MS-13,” Nassau County District Attorney Madeline Singas said. “This gang has ruthlessly targeted immigrant communities, murdered innocent children and poured deadly narcotics into our communities. I commend District Attorney Sini and our law enforcement partners for today’s historic MS-13 takedown. Due to their hard work and extraordinary investigation, our streets are safer and dozens of alleged gang members will now be held accountable for their actions.”

The investigation revealed that MS-13 gang members would allegedly sell narcotics, including cocaine, fentanyl, heroin and marijuana, and send the proceeds to gang leaders in El Salvador to purchase weapons, ammunition and additional drugs. As a result of this investigation, several local suppliers were identified, including six individuals who are charged by way of the Special Grand Jury indictment with Operating as a Major Trafficker, a class A-1 felony that carries a maximum sentence of 25 years to life in prison. The indictment also charges 13 additional defendants allegedly engaged in the supply of narcotics to MS-13 gang members.

During the course of the investigation, law enforcement seized more than 10 kilograms of cocaine; distribution quantities of heroin and marijuana; and more than 1,000 counterfeit pills that appeared to be oxycodone but were found to be fentanyl.

A criminal charge is merely an accusation and the defendant is presumed innocent until and unless proven guilty.