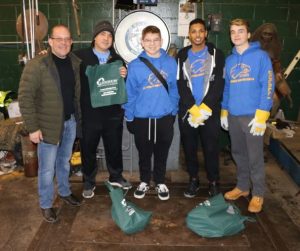 For the eleventh year in a row, Gershow Recycling opened its Medford facility to local high school robotics teams participating in School-Business Partnerships of Long Island’s (SBPLI) upcoming Long Island Regional FIRST® (For Inspiration and Recognition of Science and Technology) Robotics Competition to receive free aluminum scrap. Half Hollow Hills High School was one of eight high school robotics teams that took advantage of the program and visited Gershow on December 14.