On a 12/5/17 business trip to Albany, Brian Finnegan was made to share a hotel room with then Assembly man Chad Lupinacci of NYS 10th District, which happened on several business trips. Finnegan states that Lupinacci insisted he join him at several bars and join him for drinks, which he did not want.

While Finnegan was asleep in their hotel room, Lupinacci allegedly touched Finnegan’s pants zipper, and later stood next to his bed with his hand down his boxers. When Finnegan confronted Lupinacci the next morning, Lupinacci stated he “blacked out” and did not remember this. Based on this does our Supervisor have a drinking problem? Finnegan found Lupinacci later trying to break into his phone, however an app on Finnegans phone took a picture of this break in. 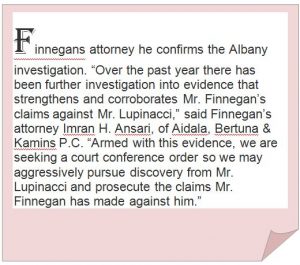 On a 12/12/17 business trip to Albany, Finnegan asked to stay behind due to illness, but was told he must attend and stay overnight. In addition, it was expected that he go out after work, and he was pressured to drink vodka with Lupinacci, even though he stated he did not want to. Several bars were visited that evening, and Finnegan was repeatedly pressured to drink.

Throughout their working relationship, Lupinacci repeatedly used his role as employer to force Finnegan to drink alcohol. After falling asleep that night in their hotel room, Finnegan woke up to Lupinacci kneeling next to his bed and Finnegan’s penis/testicles (see pages in complaint) were exposed.

Finnegan believes Lupinacci was guilty of making unwelcome sexual contact. Finnegan jumped out of bed, and pushed Lupinacci to the wall, and stated he couldn’t work for him anymore. He then got dressed and left.

Lupinacci called him later and Finnegan asked him to take responsibility for these actions, but Lupinacci hung up. Finnegan later resigned his position due to repeated accounts of sexual harassment, verbal abuse, degradation, humiliation, and causing anxiety, loss of self esteem, and emotional pain.

Finnegan states that Lupinacci abused his power as Finnegan’s employer by forcing Finnegan to join him in hotel rooms, pressuring him to drink alcohol, and by making unwelcome sexual advances and comments.  Finnegan also had been promised a job as Lupinacci’s top person in town hall, which because of Lupinacci’s actions, Finnegan decided to decline (A position carrying $100,000+/yr).  This became a main reason for the lawsuit against Lupinacci.

BELOW IS FOOTAGE FROM NEWS12:

For more detailed accounts of these allegations, see below to the actual supreme court complaint and other stories stating this in the past. Original suit was filed December 4, 2018.

This story was covered by every major new outlet: CBS, NBC, News12, NYPOST to name a few. Below please find the links to those stories:

OPINION- If any one of these allegations is TRUE, even ONE, Supervisor Lupinacci should not be in office and all HUNTINGTONIANS should be very, very, upset. If Finnegan was a woman, then groups would have called for his removal but because Finnegan is a man it’s ok. There seems to be a double standard when sexual assault/harassment happens to a man even if it is MAN TO MAN.

As of this post we have not been able to confirm this from our source in Albany, but it may appear that the State of NY is investigating all of these charges and possibly on a criminal matter. However according statements made by Finnegans attorney he confirms the Albany investigation. “Over the past year there has been further investigation into evidence that strengthens and corroborates Mr. Finnegan’s claims against Mr. Lupinacci,” said Finnegan’s attorney Imran H. Ansari, of Aidala, Bertuna & Kamins P.C. “Armed with this evidence, we are seeking a court conference order so we may aggressively pursue discovery from Mr. Lupinacci and prosecute the claims Mr. Finnegan has made against him.”

Everything in this story is based on allegations the defendant is innocent until proven guilty by a court of law. The law suit filing is shown below so you may verify for your self