January 7, 2021 3:16 pm | Filed under: Crash,Crime,Greenlawn,Hamlets,Huntington,Investigations,News,Police/Fire/EMS | Posted by: The Huntingtonian Staff 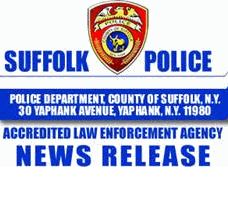 Suffolk County Police early this morning arrested a man for driving while intoxicated after he crashed his motor vehicle into the rear of a marked police car in Huntington.

A Second Precinct officer initiated a traffic stop of a 2005 Chrysler Pacifica on eastbound Pulaski Road, near Frazer Drive, at approximately 12:20 a.m., 01/01/2021.  The officer was inside the police car, which was stopped off the roadway with its lights and flashers activated, when an eastbound 2019 Honda Accord driven by William Macari crashed into it from behind. The impact of the crash caused the police car to strike the rear of the Pacifca.

The police officer was airlifted via Suffolk County Police helicopter to Stony Brook University Hospital for treatment of non-life-threatening injuries. Macari and the driver of the Pacifica were not injured.

Macari, 54, of 73 Derby Ave., Greenlawn, was arrested and charged with Driving While Intoxicated. He is being held overnight at the Second Precinct and is scheduled to be arraigned at First District Court in Central Islip on January 1.