James Polansky – Something To Agree About 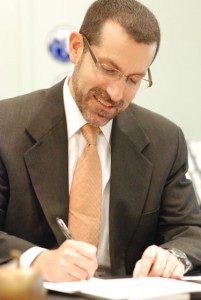 In a school district that is too often divided, there is finally something to agree about.  It’s the confidence the community seems to have in their new Superintendent, James Polansky.  When the search for a new leader of the Huntington school district was coming up short, sitting BOE member, Rich McGrath encouraged Mr. Polansky to apply for the position.   McGrath felt Polansky had all the necessary qualities to address the challenges of the Huntington School District.  It turned out all the sitting BOE members shared the same position.  One of the key factors in his decision to accept the position was the unanimous support he received from the BOE members.  He decided this was a good foundation to help him overcome the challenges ahead.

Mr. Polansky was most recently the South Huntington School District’s assistant superintendent for personnel and district services. Prior to his elevation to central administration he served as principal of Walt Whitman High School, completely turning around a struggling building and earning the 2010 New York State Principal of the Year Award. At the time of his appointment to the HUFSD, he had already enjoyed two-decades of success as a teacher and administrator in Long Island schools.

Mr. Polansky and district trustees agreed upon an initial three year contract that runs through June 30, 2014.  He assumed his position as Superintendent of the HUFSD on July 1, 2011.   Since that day he has rolled  up his sleeves and is paying attention to even the smallest details. He is found at the district office early every morning and stays busy touring school facilities room-by-room, poring over state test results, studying academic programs and course offerings and meeting with teachers and colleagues in administration.

“There is no doubt in my mind that I seized an opportunity in assuming the role of Huntington Superintendent.  The positive things about this district include a school community that is rich with tradition and diversity, and one that collectively takes an active interest in the education of its children.  Curricular and extracurricular opportunities are inexhaustible.  The district is also characterized by a strong and motivated group of educators (faculty and staff) who care genuinely about the students in their charge.  I have also rapidly witnessed the desire and impact of the many support groups (e.g., PTA, HFEE) and individuals who want nothing more than to facilitate our providing an optimal educational environment at every district school.”

Immediately upon accepting the position he began to spend time getting to know everyone from districts personnel, to students, parents and community members.  In an effort to learn as much as he can about his new district, Mr. Polansky invited incoming seniors and their parents to discuss their experiences in Huntington and he met with the parents of incoming kindergarten and first grade students.  He also reached out to and met with community activists and those who are disenfranchised with the current state of the school district.

He intends to maintain a firm handle on Huntington’s most pressing issues and address them.  Curriculum and instruction are a priority.  Enhancing student learning is the goal.  Objectives include a transition to the Common Core Curriculum, an intensive, organized and constructive approach to instructional supervision, implementation of research-based pedagogical and professional development strategies, and development of a culture of comprehensive use of formative and summative data when making curricular and instructional decisions.   He continued, “I believe we have made strides this year in terms of maintaining appropriate class sizes at all levels and will consider this and many other factors as we continue to consider a long-term facility use plan”.

When asked what he sees as some of his biggest challenges he responded,  “First and foremost, school finances present a considerable challenge.  A 2% tax cap will be difficult to navigate in the face of a cash-strapped state and a long list of mandated expenses.  This will require a meticulous budget construction process that leaves no stone unturned in terms of maximizing available revenue streams, realizing resource efficiencies, and minimizing expenditures.  Unfortunately many districts, Huntington included, have experienced a seemingly annual decline in assessed valuation, which does not help the situation”.

His quest for knowledge and approachability will go a long way in building confidence in a community that often has more questions than answers.  “Anything that either indirectly or directly impacts our ability to educate students should fall within my sphere of influence.  I do believe that there are many town policies and practices that can have such an impact, thus I hope to add a constructive voice and actions as often as warranted”.