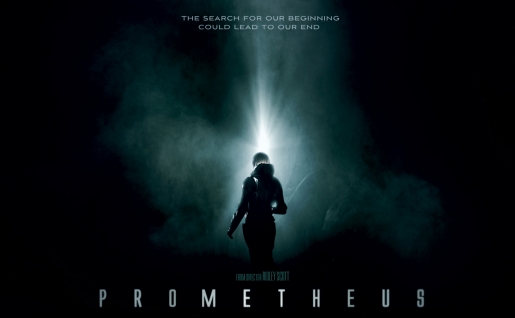 Leading up to the release of Prometheus, the new, highly anticipated science fiction film by director Ridley Scott, there existed a lot of confusion about what exactly it was. We knew it had something to do with one of Scott’s most successful films, Alien, but in what fashion the two were connected remained unclear. Was this a prequel? A sequel? A remake? Those involved with the production insisted this was something entirely new, which just happened to take place in the same universe as Alien, yet the marketing suggested a closer connection. Now that Prometheus has been released, it’s clear why Scott and his crew tried to frame our expectations in that way. Prometheus is not Alien 5, nor is it Alien 0.5, and those going in anticipating that will most likely be disappointed. This is something different, which takes strands from the Alien series and expands upon them in a fresh and interesting way. Prometheus is a very intriguing and highly enjoyable ride, which is so much more ambitious than a typical summer film and a true return to form for Ridley Scott, if not quite as great as his finest outings.

Prometheus follows a group of archeologists in the year 2089 (approximately 30 years before the events of Alien), who discover identical cave paintings among the ruins of ancient civilizations separated by thousands of years, all pointing to a specific planetary system. Elizabeth Shaw (Noomi Rapace) and her partner Charlie Holloway (Logan Marshall-Green) have a hunch that this is an invitation from humanity’s creators, who want us to come and find them. An expedition, funded by a wealthy CEO named Peter Weyland (Guy Pearce), sets out to do just that: find the planet depicted on the map, and hopefully find an answer to the age old question of where exactly we come from.

Written by divisive Lost co-creator Damon Lindelof, Prometheus follows the intrigue of that show by throwing us into a strange and mysterious setting, asking a variety of questions and leaving a few of them open for debate. The central thrust of the film is fairly straightforward, with clearly defined acts and an obvious conclusion, but as the movie unfolds it constantly presents new information to us, some of which is teased but never fully explored (making it all the more intriguing). We see glimpses of a ton of interesting things, and then are asked to leave the theater thinking about how they all connect.

This is where Prometheus will divide people, depending on their tolerance for deliberate ambiguity. That’s precisely what I love about the film, and that’s what many others dislike about it. This is the kind of movie that you see and then immediately feel the urge to discuss with other people, to debate and try to figure out what it all means. In that way I was reminded of classic sci-fi films like 2001: A Space Odyssey and Blade Runner. Already this movie has generated more online discussion than most others in recent memory. Just a few days after the U.S premiere, hundreds of detailed posts and blog entries have been written filled with theories and explanations for Prometheus’ mysteries, and I love that this is a film that allows for that kind of conversation.

What’s frustrating is that it seems as if some detractors are dismissing the film immediately as one which offers no answers, just because it’s ambiguous about them. The questions this film asks aren’t just thrown out there without any thought. Though at times the experience of watching Prometheus and trying to tie everything together can be confusing, thinking about it afterwards, it does actually make sense for the most part, and I suspect this is the kind of movie which will reward repeat viewings. At its core this is a pretty basic story about mankind’s quest to find the origin of life, and yet by the end we’re given so much to discuss that will probably still be open to debate years from now (until, potentially, Prometheus 2.) In contrast, how many big blockbusters evaporate from the public consciousness as soon as they leave theaters? Three years later, is anyone still discussing Avatar?

Speaking of Avatar, this is perhaps the most gorgeously designed film since James Cameron’s blockbuster, with the 3D actually enhancing the experience. Ridley Scott’s visual eye elevates the film so much further than just what was on the page, and like the very best sci-fi films, the opening scenes completely immerse you in the world being created. At a certain point you totally forget the fact that you’re not actually watching a real alien planet. The main set pieces are as filed with tension and pure, cringe inducing horror as some of the best moments from Alien, one in particular which is so masterfully executed that it rivals the famous chest bursting sequence. The performances are all around solid, with the clear standout being Michael Fassbender in an unbelievable performance as an android named David, though other fine actors like Charlize Theron and Guy Pearce are given criminally little to do.

Prometheus is so close to being a perfect science fiction movie, but not quite. At times it feels like we’re seeing the stripped down version, and that there’s a better director’s cut out there waiting to hit blu-ray (in fact, Scott himself has confirmed a longer cut is coming). Though the opening hour or so is exquisitely paced, during the final stretch there are times when it feels as if Scott is rushing from one big moment to the next, and that scenes in between to break up the action were cut for time. There are at least two pretty significant reveals that take place in the final act of the film which happen incredibly quickly, and could have used some more time to breathe. In addition, there are some minor points along the way that really do take you out of the experience, if only briefly. Even in the original Alien, characters would act pretty stupidly at times, but in Prometheus that’s amplified even further, and some characters make such obviously dumb decisions that it becomes distracting. These problems don’t ruin Prometheus, but there are enough where I can’t help but wonder what the movie could have been with one last rewrite, and with an extra half hour running time.

I’d recommend, upon approaching Prometheus, to erase any thought of Alien from your mind. That movie is a masterpiece, and easily one of the all time greatest science fiction films. On those terms, this doesn’t quite compare, but we really shouldn’t judge it on those terms. It may not quite live up to the trailers and there are some minor issues along the way, most of which could possibly be solved by the upcoming director’s cut. But even with these shortcomings, Prometheus is such a compelling return to classic science fiction, and I can’t wait to watch it a second, third, and fourth time. It has been a good while since we’ve seen a major blockbuster film this ambitious, which asks meaningful answers and trusts in its audience’s intelligence. That alone is enough to recommend Prometheus. The fact that it’s visually stunning and wickedly entertaining helps, too.