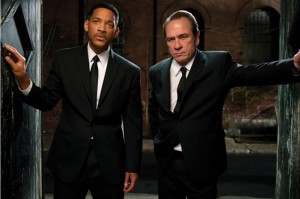 Whenever a movie franchise is revived after a long break, there’s a tendency for the new installment to stick out like a sore thumb, not quite measuring up to the originals. What’s most surprising about Men in Black 3 is that despite being released ten years after the second film, it doesn’t fall into that trap, actually fitting in quite nicely with the previous two. Though not all of the jokes work and the time travel mechanics open up several obvious plot holes, this third installment is a huge improvement over its predecessor. It’s a flawed but consistently enjoyable entry into the series, from which long time fans should walk away satisfied.

Men in Black 3 opens as Boris the Animal, a menacing alien played by Jemaine Clement, escapes from a top secret, high security prison located on the moon. As we find out, back in 1969 Agent K (Tommy Lee Jones) apprehended Boris, an intergalactic criminal, and proceeded to activate a shield called the ArcNet around the planet, which since then has protected Earth from being invaded by Boris’ species, the Boglodites. After breaking out of prison and returning to Earth, he manages to travel back in time to 1969 in an attempt to kill Agent K, and prevent any of this from ever happening.

Flash forward to the year 2012, where Agent J (Will Smith) shows up to work only to discover that his partner, Agent K, is gone. In fact, the entire course of history has been rewritten. Since Boris’ trip into the past was successful, Agent K has now been dead for over forty years, killed by Boris in 1969, and therefore he never activated the ArcNet shield. J’s partner is dead, and hundreds of alien spaceships are approaching the now unprotected planet. He must travel back to 1969 to correct the timeline, save his partner’s life, and hopefully stop that alien invasion too.

Men in Black 3 marks the return of the franchise as well as of Will Smith to the big screen, who hasn’t acted in a film since 2008’s Seven Pounds. Despite the break, he’s as charming and funny as ever. Smith slides right back into the role of Agent J as if he never left. Accompanying him is Tommy Lee Jones though only briefly, as his character is replaced by the younger version throughout the 1969 section of the movie. Unfortunately, Jones doesn’t get much to do, and in his early scenes the character is even more solemn and downbeat then usual. This serves a purpose as is revealed later on, but it’s initially a little unsatisfying that K isn’t given an opportunity to shine as he did in the previous entries.

But that feeling doesn’t last long, because the star of this show is without any doubt Josh Brolin, playing a young version of Agent K from 1969, who is so good that you stop noticing the absence of Tommy Lee Jones almost immediately. Brolin’s impression is so creepily accurate that at times it sounds as if Jones actually dubbed over his actual voice. Young K has great chemistry with J, in a similar fashion as in the first film. Both Men in Black 1 and 3 involve the two meeting and forming an unlikely bond, so MIB3 ends up tying in very nicely with the original, and serving as a great cap to the trilogy. Towards the end, things start to get a bit more serious and emotionally driven, in a way reminiscent of an early Spielberg film. This had potential to feel sappy and tacked on, but because the relationship between K and J has been so well defined and well acted over the course of this trilogy, it somehow works.

Men in Black has always been about combining legitimately interesting sci-fi concepts with silly, comic book style humor, and MIB3 fits that description. The laughs are fairly consistent, and in general Smith’s persona almost always makes for some funny situations, even if his dialogue isn’t particularly clever. It’s rarely laugh out loud hilarious, but still amusing enough to keep things feeling light and moving along at a nice pace. Not all of it’s great and there are some comedic bits that just don’t work, especially in the beginning, but once we travel back to 1969, the film finds its groove and from then on that distinct, playful Men in Black style is back.

As far as the science fiction goes, there are some pretty cool ideas here, like an alien character named Griffin (Mike Colter) who can see multiple possible realities simultaneously. The other creatures are sparse but memorable, like Boris the Animal who is as good a villain as Bug from the original. These aliens, designed as usual by Rick Baker, are as awesome and gross as ever. As is often the case, the time travel conceit creates a few obvious plot holes, but because of the comedic nature of the film, they’re easy to overlook.

Men in Black 3 is a satisfying addition to the franchise, carried by Josh Brolin’s unbelievably committed performance and the chemistry between him and Smith. Ultimately the reason it works is the character development, and the willingness of director Barry Sonnenfeld to take the relationship between Agent J and K seriously, even despite the goofy and cartoonish movie surrounding them.

It lacks the novelty and inventiveness of the original, but by the end Men in Black 3 comes about as close to matching the quality of that film as we could have hoped for, and is one of those rare second sequels which actually works.