Zach Cammer earned his spot in the mile field at the 106th Millrose Games on Feb. 16. Zach claimed an automatic bid with his victory at Friday’s North Shore Invitational.

“It wasn’t pretty, but it surely was his gutsiest win,” said Coach Rob Conroy of Cammers’ performance. “He walked off the track bleeding profusely from all of the spike cuts on his leg.” Cammer, a senior at Walt Whitman, held off a late rally by North Babylon’s Kris 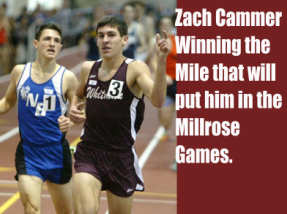 Moran to win the boys race in 4:27.95. “Friday’s race trudged through a slow first half mile before Nick Costello of Delsea tried to make a decisive move at the midpoint,” said Doug Binder in his ‘Island in the Mix’ post on armorytrack.com. Costello gained more than 15 yards on the field but the pack eventually pulled him back in. “If it was a faster race that move might have been enough,” Cammer conceded. For his part, Cammer bided his time and got into position with two laps to go and had enough kick in his legs to get to the finish line first.

“There were 60 boys teams at the Armory today from the metro area and Whitman won both of the distance events consisting of very stiff competition,” Said Coach Conroy. “Mike Damato won the 3200 in a time of 9:25.42 which is currently #2 in New York State.”
In other events at the North Shore Invitational held Friday at the The New Balance Armory Track and Field Center, commonly known as ‘The Armory’ Whitman athletes distinguished themselves in the following events: 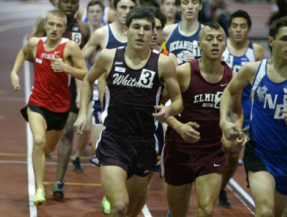 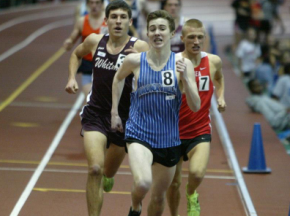 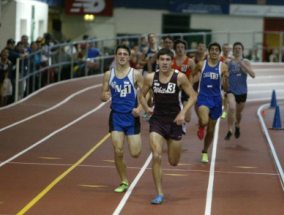 Story and Photos by Steve Bartholomew