Robert Mayer was reported missing on June 15, after he did not come home from his work as an electrician on the evening of the 14th. This was extremely out of character for him and was an immediate red flag to his wife and 2 children who had plans for Father’s Day weekend and a vacation planned for the week of July 7th.

Robert was last seen on June 14 at 2:15 pm, at a scrap yard in West Babylon, NY, where he would visit occasionally to scrap copper from the job site he was working at in Brooklyn. From there, nothing is known of his whereabouts, but his 2004 Pontiac GTO was abandoned at the Deer Park LIRR station. His next destination should have been his home in Dix Hills, by car. He doesn’t take the train, because he doesn’t trust those parking lots, he would actually go to great lengths to avoid parking there.

Ida Mayer, wife of missing Dix Hills man Robert Mayer, continues to organize friends and family as well as many concerned people whom have never met the Mayers. On Sunday, July 21, a search group met and searched the Deer Park, New York train station and surrounding area looking for clues.

A Facebook group has been started to provide ideas and support to Rob’s family. “Robert Mayer Search Group” is a place where 800 people, many of whom have never met the Mayers, meet to plan searches, create and distribute fliers, or leave words of support. (https://www.facebook.com/groups/131468517059825/)

The family asks that anyone who has information on Robert Mayer, no matter how trivial you think it might be, to please call Suffolk County Police at 631-854-8252. 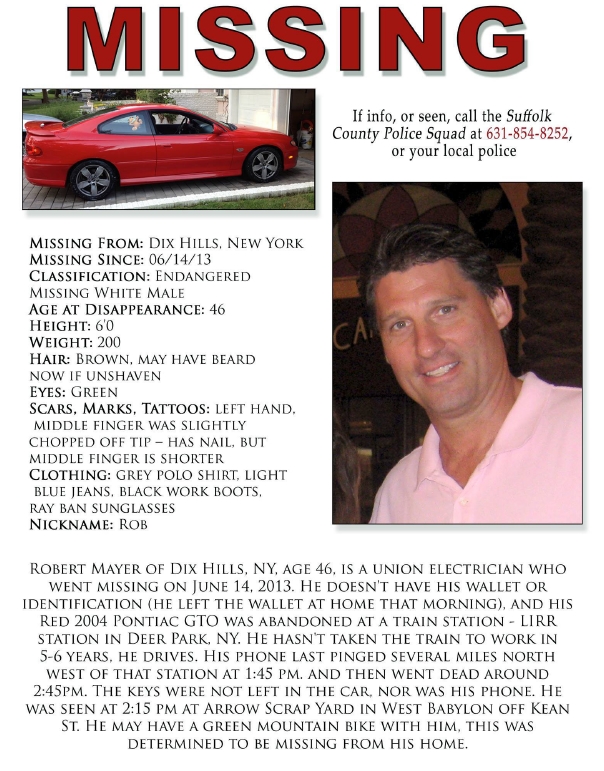