Editorial: Berland Needs Phone Call Reminder To Do Her Job

September 30, 2014 10:46 am | Filed under: Around Town,Government,Huntington Union Free School District,News,OPINION,Politics | Posted by: The Huntingtonian 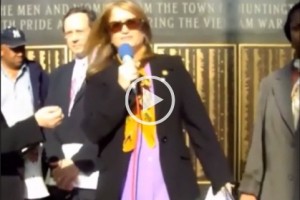 On September 16, 2014, Huntington School Board President Emily Rogan spoke on public record on behalf of the entire Huntington School Board at the Huntington Town Board meeting. She explained that the School Board was asking for better support and communication from the Town Board.   You can see the video here.  Supervisor Petrone and Councilman Mark Cuthbertson disagreed with the claims that the school district does not have their support.  Both Cuthbertson and Petrone appeared annoyed that Rogan made the statements on public record.

After Rogan finished speaking, Councilwoman Susan Berland stated, “I am always available to talk and I’ve never gotten a phone call about anything”.  Apparently Mrs. Berland has forgotten the multiple rallies and letter writing campaigns that have taken place for numerous years from the Huntington School District community.  If Berland is really surprised by the frustration of the Huntington School Board, she has not been paying attention.

The rallies grew out of frustration after other more subtle methods of trying to communicate with the Huntington Town Board and other elected officials proved futile.  Many community members have stopped reaching out to elected officials because they realize that their concerns fall on deaf ears.

Community members also realize that they have a united Board of Education and a Superintendent who is proactive in staying informed about how the local government is negatively impacting the school district. Although, we applaud the Huntington School District BOE and Superintendent Jim Polansky for continuing the battle, residents should be outraged that precious school district resources need to be spent fighting the Town Board.  Unfortunately the fight is necessary because the actions of this current Town Board under the direction of Supervisor Petrone, Councilman Cuthbertson and Councilwoman Berland have and continue to cost the school district millions in annual revenue.  Whether it be turning a blind eye to over-occupancy issues, removing properties from the tax rolls, or placing most of the non-senior high density housing in one small community, it has become very necessary for the Board of Education to be involved in town issues.

We applaud Ms. Rogan for going on public record and letting the residents of the Huntington School District community know that the Board of Education is united and they have tried in numerous ways to maintain better communication with the town board and they will continue to reach out no matter how many times their outreached hand is slapped away.

The video above is a friendly reminder to Ms. Berland and her constituents that the Huntington School District community has reached out before, many times.  In the video from 2010, Berland claims she never received a phone call for support. She is still making those same claims in 2014. Both before and after the rally depicted in the video, the school district received little to no support from all levels of government.  The difference today is that the community now has a Superintendent who pays close attention to all issues that affect the school district. Although we think it is extremely necessary that Superintendent Polansky continue to pay very close attention to the actions of the Town and County governments as they impact the school district, we also find it outrageous that corrupt and inept politicians make this so necessary.

To view the full video from the 2010 rally, click here.