Young People have lost Faith in Town Government, a Letter from a 19 year old- S.O.S. 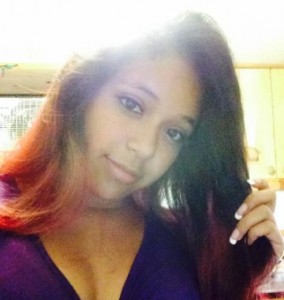 Editor’s Note: Kelly wrote this note because of the violence that has surrounded her home, her friends, her family.  She was quite courageous in her thoughts and words below. As someone living in this community for 57 years this letter brought me to tears. What say you Frank Petrone? But better than that, what are you going to FINALLY DO, asks Kelly Bilodeau?  Please answer her and the Community.

To Whom it May Concern,

My name is Kelly Bilodeau. I am nineteen years old, I am from Huntington Station, NY and I am currently a sophomore at the University of Maryland.

I was hesitant to even contact you as most people my age have lost faith in the government’s ability to represent the people whose sweat and money keep it’s faint pulse alive and feel that their voice (or one simple email like this) is sure to go unnoticed. But typically change only happens when a person who has experienced something that really hits home takes some sort of initiative. So this is part of my initiative.

I was unsure of what to choose as the subject for this email. I settled with the “immigration” option, but in reality I would have liked to make it “S.O.S.” Because that is how I feel. My home town is sinking and I feel helpless, with no idea how to save it. This repetitive event that has my town in its grip is beginning to take its toll on everyone, not just residents who are directly connected. Immigration is an issue entirely of its own and I think the issue we have in Huntington goes much deeper.

This past summer a young man was shot to death (0.7 miles from my home) and even though I did not know him, it is obvious, after I happened to pass by the street on the day of the funeral and saw it filled with people, that he was respected and loved by so many. And for the others, like me, who did not know him, I’m sure I can say on their behalf that this tragedy was still difficult to come to terms with because of how local it was.

And now just a few days ago I heard the news of another Huntington resident’s passing. In particular, a former peer of mine from high school. She was stabbed to death (0.5 miles from my home) and left there to die. This is the same girl who I played Uno with at lunch my senior year of high school. Now I’m not saying we were best friends and confided in each other, because to be honest I didn’t even recognize her name when I was told she had died. But upon seeing pictures and seeing her smile, I remembered her vividly. A girl who was nothing but nice to me, complimented my hair or something I was wearing. “The girl with the colored contacts from lunch,” I said to myself, “this doesn’t make sense. Who would do something like this?”

Recently I listened to an audio recording between a female resident and an elected town hall official. He had not even the slightest clue about 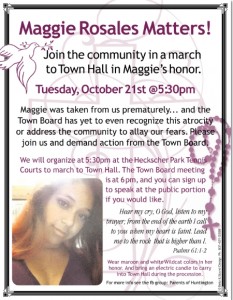 my former peer’s passing. How is it that I am living all the way in Maryland and I hear the news significantly sooner than this man does? I’m not sure what his agenda is like, but I am sure that this tragedy should be at the top of it.

I am even more discouraged after reading the comments on the various articles of my peer’s passing. “Drawing a line in the sand” is an understatement. These two deaths have created monumental dividers in our community. It has become an issue of race and minorities and the blame-game behind a computer screen. However one thing is unanimous, and that is that murder and death are becoming the norm. Most people aren’t even fazed by a violent death anymore because of its frequency. This should not be the case anywhere, yet alone the suburbs of Long Island.

As a nineteen year old girl, I have not the slightest idea of how to solve a problem this crippling. So I am asking you for your help. Whether the cause of these events is immigration, gang violence, or jeez I don’t know bad parenting?…Huntington needs some life preservers and life rafts if we want to have a fighting chance at saving our town. Maybe that’s in the form of more policemen and women on duty in high crime areas or maybe a program geared towards helping the youth stay out of dangerous situations. Whatever it is, we need it, because if residents of my neighborhood are afraid to walk down their streets, then things can’t possibly be working.

So hopefully by addressing this as “To Whom it May Concern” this email will actually find its way to someone who won’t simply read a few lines and move on. And hopefully I have conveyed a sense of urgency because the two deaths I mentioned were not the only ones and if nothing changes, there will be more.

4 Responses to Young People have lost Faith in Town Government, a Letter from a 19 year old- S.O.S.