Residents O’Donnell and McGoldrick Blast The Town Board & Police

October 23, 2014 11:51 am | Filed under: Around Town,Crime,Huntington Station,News,Video | Posted by: Nicholas Wieland 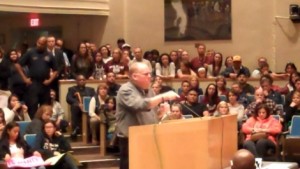 Editor’s note: The content of this video is not suitable for children. This video is large and may take some time to appear especially on Mobile devices.

In the video below, Mr. O’Donnell and  Mr. McGoldrick, two lifetime residents of the town, address the Huntington Town Board at the October 21, 2014 Town Board meeting.

They were outraged that County Executive Bellone and Police Chief Burke addressed the crowd and then left before they heard what anyone had to say.

These men explain how they have been hearing about the revitalization of Huntington Station for years but have seen no progress.

Both men and their families saw the crime scene after Maggie was murdered. Mr. O’Donnell stated, “I only wish you guys could have seen what I saw because then maybe we could get something done around here.”

They were both appalled that days after Maggie’s murder Susan Berland and Lou D’Amaro found their way to march in the South Huntington Homecoming parade but had no interest in addressing any of the more serious issues.

For years these men have tried to get the issues addressed and were told things like, “If you don’t like it here, why don’t you move?”

They both explain that they were treated very disrespectfully by the police officers that were handling Maggie’s crime scene with the exception of one officer. Mr. O’Donnell praised this officer known to him as Dave, stating “He could teach these cops what the words mean to serve and protect.”

Both O’Donnell and McGoldrick said the cops were harassing and bullying local residents that were reporting incidents and they are not patrolling the streets.

The men who speak in this video have endured decades of broken promises and inaction.  They are fed up.

The entire 12 minute video is compelling and worth watching.