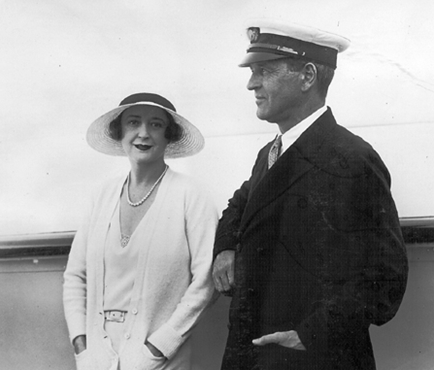 The Suffolk County Vanderbilt Museum will celebrate the 65th anniversary of its official opening on July 6.
William K. Vanderbilt II — great-grandson of Cornelius Vanderbilt, the railroad and shipping magnate — died in 1944. His wife Rosamund continued to live in the Vanderbilt Mansion in Centerport until her death in 1947.

He realized the potential for his sprawling estate to become a museum for what he called “the use, education and enjoyment of the general public.” That wish prompted him to leave his estate, and a trust fund to finance its operation, to Suffolk County. The county opened the museum to the public on July 6, 1950.

The anniversary coincides with Arcadia Publishing’s release of Eagle’s Nest: The William K. Vanderbilt II Estate by Stephanie Gress, director of curatorial services for the museum. The book is available on the Arcadia Publishing, Amazon and Barnes & Noble websites, in the Vanderbilt Museum Gift Shop and at local bookstores.

Today, the Vanderbilt estate and museum are an important part of Long Island history. It is a destination for regional visitors interested in natural history, the life of the oceans, armchair journeys through space, and the history of the privileged life on the Gold Coast from the Jazz Age through the Second World War.

The Vanderbilt’s Charles and Helen Reichert Planetarium is another magnet for visitors. The museum decided to add a planetarium in the late 1960s. Trustees knew a planetarium would enhance the museum’s ability to carry out the science-education aspect of its mission and to honor Mr. Vanderbilt’s love of science and astronomy, and his interest in celestial navigation.

A planetarium also would augment the original Vanderbilt trust fund and help to ensure financial sustainability. The planetarium was opened to the public on June 28, 1971.

Mr. Vanderbilt — known to family and friends as Willie K. — loved the sea and the natural world. In his global oceanic travels, he collected fish and other marine life, birds, invertebrates and cultural artifacts for the personal museum he planned to build on his Long Island estate.

Willie Vanderbilt exhibited thousands of the marine specimens he had gathered — one of the world’s most extensive, privately assembled collections from the pre-atomic-era — in his own marine museum, the Hall of Fishes, which he opened to the public in 1922. Wings of the mansion contain galleries of his natural-history and cultural-artifact collections, including the Habitat with its nine wild-animal and marine-life dioramas and eight more in the adjacent Stoll Wing, all created by artisans from the American Museum of Natural History.

The 43-acre waterfront museum complex counts among its extensive collections (which total more than 30,000 objects) the mansion, curator’s cottage, a seaplane hangar and boathouse, centuries-old household furnishings, rare decorative and fine art, the archives and photographic record of Vanderbilt’s circumnavigations of the globe, and published books of his travels. The estate, mansion and museum are listed on the National Register of Historic Places.

Photo above from Vanderbilt Museum archives. Rosamund and Willie Vanderbilt, aboard their 264-foot yacht Alva during the 1931 world cruise.