Letter to the Editor: Demand Reform so that Election Laws Protect the Public Interest, Not the Political Insiders 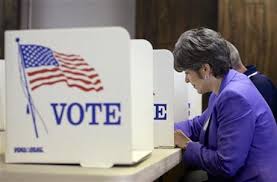 For a brief moment, it looked like Huntington Democrats would have a vibrant range of choices in the race for Town Council. The Town Democratic Committee had backed an incumbent, Susan Berland, and local businessman, Keith Barrett. And there were two challengers: Bill Naughton, ex-Highway Superintendent and party renegade, and newcomer Andrew Merola. As a Democrat, I was looking forward to campaign offering different perspectives and possible new ideas.

Yet we will not have those choices come Primary Day. Once again, party insiders have used New York’s election laws to undermine the democratic process. The election laws are an Orwellian construct that claim to protect voters, but in fact, limit the rights of voters and access to the ballot. New York’s laws have been routinely criticized by good government groups.  Elsewhere in the country, we have seen the use of election laws to disenfranchise minority voters; this year in Huntington, they have been used to deny voters choices and to keep newcomers and those who challenge party orthodoxy off the ballot.

It does not have to be this way. In recent elections, the Presidential candidates of both major parties have agreed not to challenge another candidates’ petitions. In Huntington, the party designees could have said they wanted to run on their character, track records and ideas. They did not. Instead of standing in the public forum to discuss ideas and what is best for the Town, the candidates worked with party insiders to shut down debate. They were more interested in retaining power than working for what is best for the Town of Huntington or protecting our democratic ideals.

Some say that avoiding a primary fight is good for the Democratic Party, but I disagree. Blocking challenges to the current hegemony leads to a rotting from within and a dearth of new and younger voices. Had the national party done the same, we never would have seen Barack Obama reach the White House.

What happened is a shame for the Town of Huntington and the Democratic Party. We want more voices and ideas, not fewer, and we particularly want to encourage younger and newer candidates like Mr. Merola. Ms. Berland and Mr. Barrett have much to offer voters, but their support of this insider maneuver taints their candidacies. Denying candidates access to the ballot and limiting voter choices suggests they are afraid of open debate. If they sacrificed the interest of the Town and democratic principles for the sake of their own self-interest, what other choices will they make to put their personal interest ahead of the Town’s interest?

If we shrug our shoulders and say that’s just the way it goes, then we are complicit in a process that favors the insiders over the public interest. What can we do as citizens? I urge two actions. We should withhold our support from any candidate who manipulates the election law to serve their self-interest. Deny these candidates your time, money and most of all, your vote. And we should demand reform from our State elected officials so that the election laws protect the public interest, not the political insiders.