John Riley has what it takes to develop a top notch research project capable of capturing the respect of leading scholars. The Huntington High School sophomore was honored by the New York State Archives and the Archives Partnership Trust as the recipient of the Laura and Robert Chodos Award for Excellence in Student Research Using Historical Records for grades 9-12. 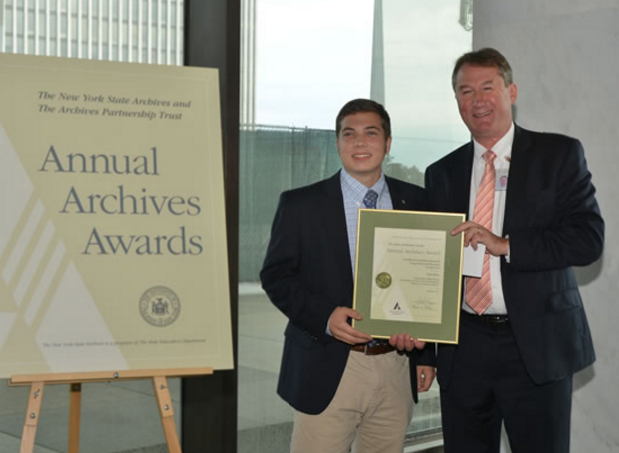 The State Archives presented Mr. Riley with his award during a recent luncheon at the Cultural Education Center in Albany. Huntington social studies teacher Lauren Desiderio was also honored.

“John continues to impress in essentially all that he does,” Huntington Superintendent James W. Polansky said. “His successful research is a direct result of his interest in learning and his passion for the subject matter. This interest and passion will surely take him to great places through the remainder of his academic career and well beyond.”

Contest judges commended Mr. Riley for his comprehensive research, analysis and use of historical records and for incorporating his own perspective on the topic. He received a cash stipend and a handsome framed certificate.

The student research awards are named for Board of Regents Emerita Laura Chodos and her late husband, Dr. Robert Chodos who created an endowment to encourage students to explore the wealth of historical records available in New York State.

The awards are presented annually to a student or group of students in the state who have made outstanding use of historical records in their research. They recognize student work for demonstrating excellence based on specific criteria: Using a variety of historical records, drawing on information from those records and interpreting and integrating that information with creativity and imagination.

“Every year the State Archives invites students and educators from throughout the state to create projects that utilize primary source documents to explore New York’s past,” Acting State Archivist Thomas J. Ruller said. “From hundreds of submissions, we select the very finest. It is our hope that the enjoyment that these students and their teachers derived in putting together these award winning efforts will make history relevant for them in the near future and throughout their academic careers.”

“It’s certainly refreshing to see young people take such a deep interest in the rich history of our nation and then apply it to cultural endeavors,” Lupinacci said. “I congratulate John for his efforts and applaud the faculty of Huntington High School for providing students the support and resources they need to excel in creative arts such as filmmaking.”

Lupinacci visited Huntington High School on November 24 to present Riley with a New York State citation and an official Assembly pin to commemorate his accomplishments. 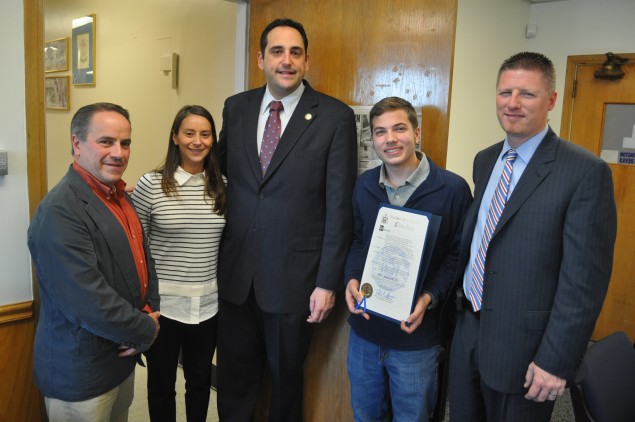