Anekstein, of East Northport, has earned 23 merit badges during his Boy Scouts career, and for his Eagle project coordinated the construction of a Holocaust memorial garden at Temple Beth David in Commack.

“Matthew’s decision to pay solemn tribute to one of history’s darkest moments provides a valuable tool for promoting acceptance and awareness,” Lupinacci said. “His most recent efforts are emblematic of his time as a Boy Scout and his dedication to community service.” 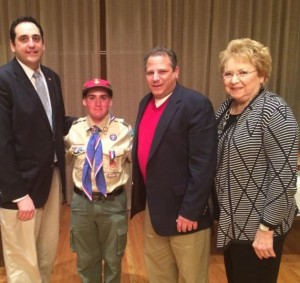 citations to commemorate the momentous occasion for the young man and his family.

“I’ve had an opportunity to follow Matthew during his rise to Eagle. He is a most impressive young man who has already achieved much in his young life and serves as shining example of what an individual can do when they put their mind to it,” Raia said.

In addition to his Scouting accomplishments, Anekstein is a recent graduate of Boys State, a summer leadership and citizenship program sponsored by the American Legion. During the camp, participants, who are selected by their high school and sponsored by local posts of the American Legion, are immersed in the intricacies of government during their stay.