Two Commack High School seniors were named as Intel Semifinalists on January 6, 2016, David Li and Mehtaab Sawney. They are among only 300 students in the entire country chosen for this prestigious honor. This year, there were more than 1,750 entrants from 512 high schools in the U.S., Puerto Rico, and from six overseas American and international high schools. Each semifinalist will receives a $1,000 award with an additional $1,000 awarded to the school.

David’s project, which has already garnered many prior awards, is “A Wireless Tracking System for At-home Durable Medical Equipment during Natural Disasters.” During natural disasters, it is critical for refugee centers and hospitals to gather information and location of patients dependent on life support medical equipment which can fail during associated power outages. David developed a solution that utilizes a radio network formed among patient devices to automatically and securely report such information to patient refugee centers and hospitals without the need of Internet and cell access. After implementation, tests were performed to determine whether the devices can form a peer-to-peer network, and be feasible in power consumption. A network simulation was also developed to determine the feasibility of such a network. The design was shown to be feasible, and with proper adaptation, can be used on a large scale.   David’s work has already been published in prestigious science journals, and he has also presented his project to venerable scientists.

Mehtaab’s project, “A Study of Bar and Arc k-Visibility Graphs,” studied an area of mathematics which is useful in modeling Very Large Scale Integration (VLSI). VLSI is the process by which thousand of transistors are wired efficiently on a tiny computer chip. These chips are used in our common devices, such as computers and cell phones. Specifically, his work was related to classifying these Visibility graphs, and to determine some of their features. Mehtaab worked with a scientist at MIT in the prestigious PRIMES program.

Dr. Donald James, Commack’s Superintendent, said, “We are so proud of our science research program in Commack. Our incredibly dedicated teachers and staff work endlessly to prepare our students with the insight and knowledge, as well as the tools and resources they require to accomplish their research. Many of the topics the students choose to pursue have the promise to change the future. Congratulations to David and Mehtaab, we’re very proud of your accomplishments and wish you luck in the next stage of the Intel Competition.” 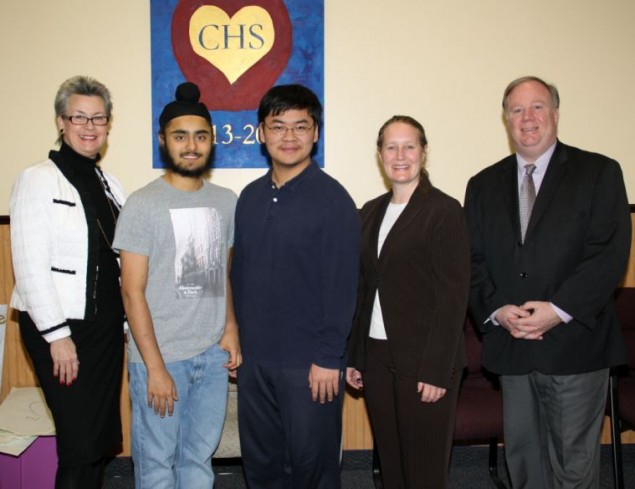