Town Code amendments seek to regulate rentals offered by networks such as Airbnb, HomeAway and VRBO

The Town of Huntington has scheduled a January 10, 2017 public hearing on two measures aimed at regulating transit short-term rentals such as those offered by networks like Airbnb, HomeAway and VRBO. 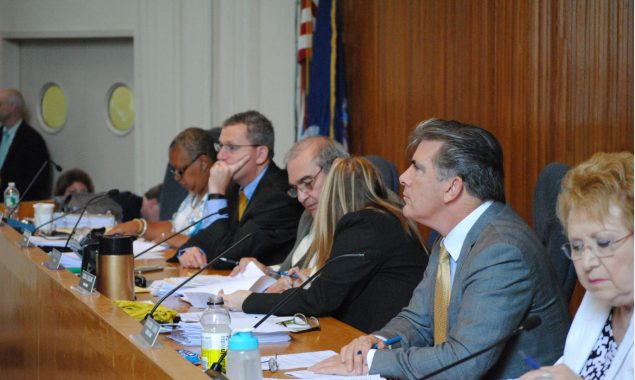 Sponsored by Council Members Mark Cuthbertson and Tracey Edwards, the first of the two proposed changes in Town Code would prohibit accessory apartments from being used as transit rental properties, which is defined as any residential property rented for a period of less than 30 days. The second would prohibit the issuance of rental permits to transient rental properties.

The resolutions note that the increase in residential homes being rented for short periods of time “detrimentally affects the quality of life in the neighborhoods in which they occur” and adds that the Town is considering enacting the regulations to protect the health, safety and welfare of residents and the community at large.

In other action at its December 7 meeting, the Town Board:

— authorized a $603,000 contract with the architectural and engineering firm Savik & Murray of Bohemia for professional services – including conceptual design, permitting, contract documents, construction inspection and monitoring – in connection with the transformation of the former Armory on East Fifth Street in Huntington Station into the James D. Conte Community Center.

— authorized an amendment to the license agreement for a caretaker for the Ezra Carll Homestead, transferring the arrangement from Dominic Drwal, who passed away in July, to his three adult children. The terms are the same as the previous license agreement.

— authorized an inter-municipal agreement with the Town of Brookhaven to accept and process single stream recyclables collected in Huntington.

— authorized executing a contract of sale to purchase the 7.5-acre Kruse property in Fort Salonga at a purchase price not to exceed $160,000. The proposed acquisition would extend to 11 acres a protected park that will remain in its natural state with trails. The property is at the northern end of Timber Point Drive.

— set new fees for 2017 spring, summer and autumn wet storage of boats at the Town marinas. The new fees, set with the recommendation of the Harbors and Boating Advisory Council, are $90 per foot for vessels 20 feet and under and $100 per foot for vessels over 20 feet. The increase is $5 a foot in both classes of vessel.

— approved the 2017 Public Art Plan and authorized the Public Art Advisory committee to proceed with its implementation.

— set the fee for attending the Adult Day Care program at $50 a day. The $10 a day increase is the first in nine years.

— scheduled a January 10 public hearing on proposed license agreements with Gelucci Brands LLC to operate and manage the food concessions at the Crab Meadow Golf Course and with Dietz Golf Corporation to operate and manage the golf operations at Crab Meadow and at the Dix Hills Golf Course. Both companies were selected after public bid. They will replace Integrity Golf, whose license was rescinded by the Town.

— scheduled a January 10 public hearing on a proposal to change the zoning and lift restrictive covenants on an office building on Route 110 just north of Jericho Turnpike in Huntington Station. The building, former a school, has been used as an office building since 1981 under a use variance. The zone change would allow for easier changes among the tenant mix without repeated applications for use variances before the Zoning Board of Appeals.

— scheduled a January 10 public hearing to change the zoning and remove the restrictive covenants on a piece of property on Walt Whitman Road in Melville to allow for construction of a Home Goods store. The covenants were enacted when a day care center was proposed for the site. The center was never built.

— set a January 10 public hearing to consider establishing potential terms of a shared acquisition with Suffolk County of farmland development rights from the Fox Hollow Farm in South Huntington.