Acclaimed playwright and entertainer JD Lawrence will debut his latest play, “Harriet, Rosa and Me” at February 16 event

The Town of Huntington will mark the 30th anniversary of its Black History Month celebrations February 16, 2017 with a special program featuring the World Premiere of “Harriet, Rosa and Me,” a thought-provoking, inspiring and witty theatrical presentation written and directed by acclaimed playwright and entertainer JD Lawrence.

Set in a local city bus stop, the show tells the story of a young lady named Hope who decides to skip school to avoid a Black History exam she refused to study for. As she lets several buses pass without getting on them, she notices another young lady, Rosa, who’s not getting on the bus as well — for an entirely different reason.  As the two make small talk, Rosa informs Hope who she is as well as the importance of Black History and why Hope should get on the bus. However, when Hope reluctantly rejects Rosa’s candid advice, Hope decides to take the subway that’s just feet away from the bus stop. As she leaves the bus depot, she comes face to face with Harriet and is once again reminded of the importance of Black History, but this time the gloves are off as no-holds-barred Harriet gives Hope a dose of reality. Will Hope get on the bus or will she let a life lesson pass her by? 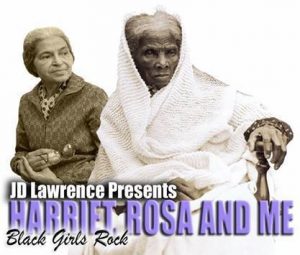 Lawrence, the recipient of the 2017 NAACP Legacy Award, is a singer-songwriter, playwright, actor, comedian, author, director and producer of films, television and stage plays who has been called “The King of Dramedy.” He has mastered the art of improvisation infused with drama, comedy, and music. He has repeatedly performed to sold-out audiences across the country and is the only playwright to write, sing, direct, produce, score and perform over seven different characters in his own production in Las Vegas’ Planet Hollywood.  Lawrence has written, directed and starred in more than 15 nationally acclaimed touring productions.

In February 2013, he became the first person to create, write, direct, produce, score and portray over ten characters in two simultaneous productions on television: “JD Lawrence’s Community Service” on the GMC television network, and “JD Lawrence’s The Clean Up Woman,” now on BET. He is the first playwright to make the Network Journal’s (in association with Time Warner) Top Forty African American Entrepreneurs List.

“A 30th anniversary calls for a special program, and what is more special than the world premiere of a distinguished author and performer’s thought-provoking play highlighting two major figures in Black History?” Huntington Supervisor Frank P. Petrone said. “Adults and children of all ages should be both enlightened and entertained by this program, and I invite everyone to attend.”

The program will begin at February 16, 2017 – 7 p.m. at the Jack Abrams STEM Magnet School, 152 Lowndes Avenue, Huntington Station. It will also feature selections performed by the Voices of Huntington Choir and recognition of two distinguished Huntington residents: Betty Miller, a former minority affairs coordinator for the Town and past president of the Huntington chapter of the NAACP; and Les Payne, a Pulitzer-prize winning reporter, editor and columnist.

A collation will follow the program. The public is invited to attend; admission is free, For further information, contact Kevin Thorbourne, Director of Minority Affairs, at 631-351-2842, or kthorbourne@huntingtonny.gov