The Harborfields Central School District is pleased to announce that physical education teacher Christine Collins has recently been inducted into the Long Island Metropolitan Lacrosse Hall of Fame. Collins was nominated by the board of the LIMLF and voted on by the general membership of LIMLF.

Currently a teacher at Thomas J. Lahey Elementary School, Collins has been a valued member of the Harborfields community since 2003 and has coached lacrosse in the district for 10 years. She is currently taking a break to enjoy motherhood and coach her three daughters.

As an avid lacrosse player, Collins has played since she was in fourth-grade. She was named an “All Everything” player for Dalers at Farmingdale High School and received the title of “All-American” in college while playing lacrosse for the Tar Heels in North Carolina.

Being inducted into the Hall of Fame was an honor for Collins.

“In my career I was fortunate to be coached by some incredible people and have played with some of the best around,” she said. “My induction is a reflection of my former teammates and coaches.”

Director of Health, Physical Education and Athletics John Valente was exceptionally proud of Collins, who was once his former student.

“Christine is most deserving of this recent induction,” he said. “It is truly gratifying for me to have witnessed Christine grow and mature into the person she is today after having had the privilege and distinct honor of teaching and coaching her while she was a student at Farmingdale High School. Christine ‘wrote the book’ in being a three sport athlete and excelled in each!” 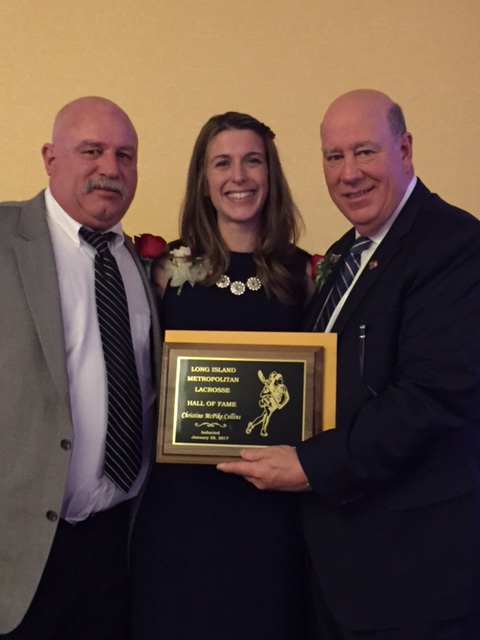