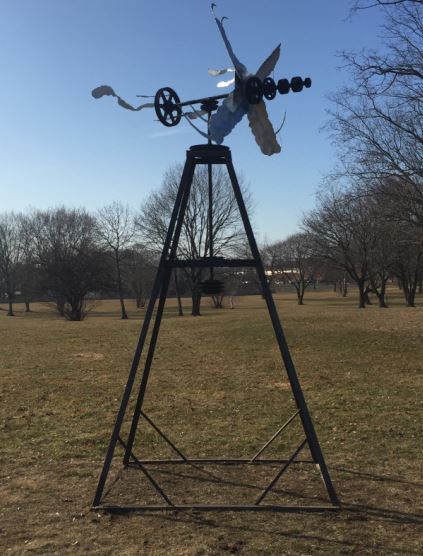 Ferrous Equinous, the sculpture of a horse that has graced Fair Meadow Park since 2010, finally has some company.

Two works by Fort Salonga sculptor David Haussler – Fan Fare and Water Twist – were recently installed at the park, located at the intersection of Park Avenue and Pulaski Road.

Haussler, who has been facing recent serious health issues, donated the two works to the Town as a gift to the community. Both are welded steel sculptures. Fan Fare is evocative of windmills that dot the landscape in the rural Midwest. Similarly, Water Twist recalls tornadoes traveling across the Great Plains. 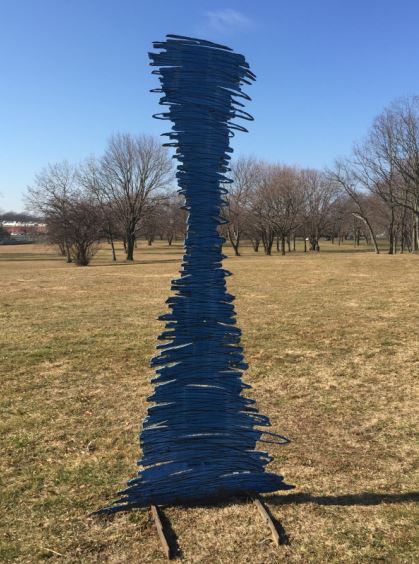 “Over his distinguished career, David Haussler has contributed much to art and art education in our community and to helping set the standards for public art in the Town,” Huntington Supervisor Frank P. Petrone. “All Huntington residents thank him for donating these two pieces, which will serve as a fitting legacy.”

Haussler is a founding member of the Town of Huntington’s Public Art Advisory Board. He has taught welding and other sculptural techniques to a number of area artists over the years, in addition to serving as an artist mentor to many, including Ferrous Equinous artist Sandy Farkas. Among other contributions that he has made to the community, he was the person primarily responsible for organizing the rotating loans of outdoor sculpture from area artists to the South Huntington Public Library. He is a founder of Long Island Professional Sculptors and Supporters, a grass-roots organization dedicated to developing sculpture awareness throughout Long Island by expanding spaces for sculptors, advocating public art projects, developing alternative show sites and making sure public art projects are executed by qualified artists.

Haussler’s career spans more than 30 years of commissions, gallery and museum shows, television appearances and a children’s book featuring David the sculptor. His talents include the ability to combine a powerful presence with a sensitive display. He has a unique way of handling metal to make it flow freely and appear as though it is in flight. Interested persons can learn more about Haussler at his website, www.dthsculptor.com.