Huntington Town Board Recognizes 2017 Poetry for the HART Winners 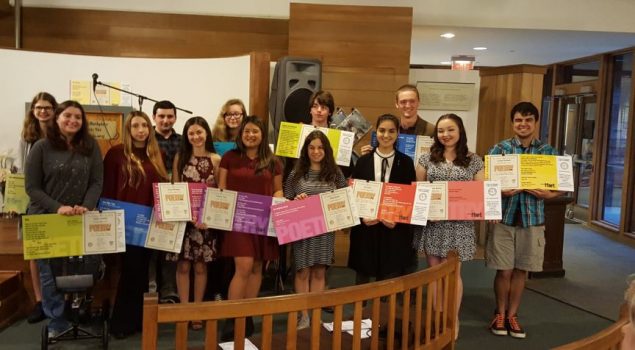 Immediately following conclusion of the award ceremony was a poetry reading led by featured poet Steven Licardi, with additional contributions by poets Kate Kelly and John A. Brennan (two of the four jurors who selected the winning poems), at which each of the teen poets selected for the program had an opportunity to read their winning poems.  A brief public reception for the poets followed the reading.

The winning teens and the poems selected for display are:

Steven T. Licardi is a New York State Licensed Social Worker, an author, spoken word poet, motivational speaker, actor and activist.  His current work attempts to meld rhyme scheme and free verse poetry together in ways that feel seamless, subtle and resonating.  As a child, Steven was diagnosed with a Pervasive Developmental Disorder, an Autism Spectrum Disorder, which manifested as an inability to emotionally comprehend his own thoughts.  Poetry and performance provided him with the language to understand himself and the world around him.  Steven now uses spoken word to fight for social justice and human rights around the world by modeling empathy and inviting dialogue among diverse audiences. You can learn more about him at his website, www.TheSvenBo.com.

Kate Kelly is a poet and visual artist.  Her poetry has been widely published in small press magazines. She has authored many chapbooks of her work and a full-length book of poems, Barking at Sunspots.  Her visual work has been featured in many group exhibits and she has had numerous solo exhibits both in New York City and on Long Island.  For 40 years she has served as associate editor of Humanities Magazine, has served as an editor of the online Poetry Bay Magazine, served as assistant director of the Northport Historical Museum and acted for many years with the Bare Bones Theater Company in Northport.  In 2005, she was recognized by State Sen. John Flanagan as a New York State Woman of Distinction in the Arts.  Kelly is also a founding member of the Northport Arts Coalition, which is devoted to showcasing Long Island artists, writers and musicians.  Currently she is putting together a solo show of her work to benefit Alzheimer’s research.

Irish Author and Poet John Anthony Brennan is a native of Crossmaglen, a small, tough town in County Armagh, Ireland. His first book, Don’t Die with Regrets: Ireland and the Lessons My Father Taught Me, was chosen as winner in the ‘Next Generation Indie Book Awards’ in 2015.  It was also chosen as a finalist in the ‘Worldwide Book Excellence Awards’ for 2016.  His second book, entitled, The Journey: A Nomad Reflects, is his first poetry collection and continues his life story in a series of free verse and rhythmic narrative.  The Journey: A Nomad Reflects also has been chosen as a finalist in the ‘Worldwide Book Excellence Awards’ for 2016.  His writings are a representation of a life’s journey and are intended to inspire and inform the reader of a long forgotten Ireland, its connection with the wider world and the deep rooted history embedded in the island’s rocks and the soil.  The author has visited most of the sacred sites in this world and is convinced that a common thread connects them.  He incorporates his experiences in his works and some of his writing expresses the spiritual dimension.  He writes short stories and poetry and performs his works at many venues in Ireland, New York City and Long Island.

Poetry for the HART is a Public Art Initiative project developed by the Town’s Public Art Advisory Committee in conjunction with Teenspeak, Co-Lead Agency, who suggested the project to the Town.  Teens in the community from ages 14-18 were invited last fall to submit poems for consideration in the program.  A selection panel comprised of the poets Kate Kelly and John A. Brennan, joined by Jim Metcalfe and Caitlin Sempowich, members of the Town’s Public Art Advisory Committee, were charged with reviewing the 295 different submissions from 208 different teen poets and narrowing the choices to the winning poems.  Additional partners in this project include Heckscher Museum of Art; Huntington Arts Council; The Long Islander, which has pledged to publish the winning poems; REACH CYA; Town of Huntington Youth Bureau; Tri-Community Youth Agency; the award reception host – Walt Whitman Birthplace Association; and Youth Directions & Alternatives CYA, as well as numerous area teachers who actively encouraged their students’ participation.  Subsequent to the ceremonies, colorful placards, each bearing a winning poem, will be placed in the interior advertising spaces on buses throughout the HART system.  Information on previous winners of the Poetry for the HART program and their winning poems can be found at www.HuntingtonNY.gov/HARTpoetry.

The text of the winning poems is available upon request.  For further information on Poetry for the HART or other Town of Huntington Public Art Initiative projects, contact John Coraor, Director of Cultural Affairs, at 631-351-3099 or via e-mail:  jcoraor@HuntingtonNY.gov.