Huntington Republican Leader Toni Tepe Has Passed Away at 75

April 9, 2020 1:53 pm | Filed under: Government,Hamlets,Heart of the Community,News,Politics | Posted by: Nicholas Wieland 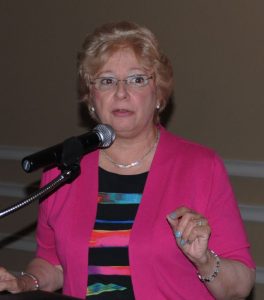 Toni (Bifulco) Tepe who was formal known as Antonia Rettaliata served as Huntington Supervisor from 1987 to 1989 and was the current chair of the Huntington Republican town committee.

She also served as:

Was Chair of Huntington Republican Committee From 2010 to 2020

She was fighting cancer over the last months of her life.  Three weeks ago her second husband Phil Tepe, a Town of Huntington Fire Marshal succumbed to a major heart attack. Phil was a well know member of the Dix Hills Fire Department and ex-chief.

Toni Bifulco was born in Huntington, where she grew up and married first husband John Rettaliata Jr.  She went on to be a State Assembly member for 8 years. She was the first Female Supervisor of the Town of Huntington and was the Republican Party chair for 10 years.

Councilman Eugene Cook stated : “Many people know of Toni’s political career, not only being a member of the NYS Assembly (1979-1987), Huntington Town Supervisor (1988-1990), and the Republican Chairwoman as long as I have known her.  More importantly, Toni was a dear friend, loving wife, adoring stepmom and grandma, who cared deeply for Huntington.  Toni and I may have not always agreed on the politics of Huntington, but I always had great respect for her, and valued her opinion, friendship and the passion she had for her hometown.  She will be missed by many, but I know that she is where she wanted to be, by her husband Phil’s side, in a place filled with peace.  I have and always will admire the love they had for each other and their family, and together they will look over the Town of Huntington.”