This week as we all are told to stay inside, our town now has its own crisis, and the COVID-19 virus, may have saved Supervisor Lupinacci 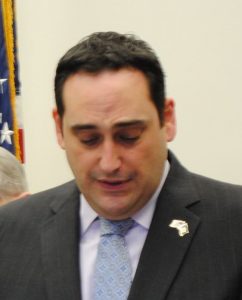 from public ridicule. On March 10, 2020, the town board meeting went into executive session without Supervisor Chad Lupinacci. The resolution 2020-184 (see below) called for the town attorney to hire an outside law firm to investigate a personnel matter and to not spend more than $20,000. It appears from sources at town hall that the attorneys hired are the law firm of Jackson Lewis with offices in most states in the country. The town hired the Melville office to run the investigation into the alleged formal complaint by a town employee against the Supervisor.

Councilman Cook declined to comment on an ongoing investigation. But sources from town hall have told us that this investigation of Lupinacci is of a sexual matter with another man. In 2018 Lupinacci was served with a sexual assault/abuse case by Brian Finnegan, his chief of staff. Now it appears it may be happening again. Councilwoman Cergol was so concerned when a male, Department Director Sammis, had a sexual complaint against him and because it was a man to woman complaint, she was outraged. Sammis had to resign because of the complaint. And that complaint involved emails of a sexual matter.  Yet we understand that this man on man complaint against Lupinacci is very different than just emails. So Councilwoman Cergol, Huntingtonians want to know where is your outrage now?

Sources at town hall have stated “If Sammis had to resign over an email and these allegations against the Supervisor are worse, as they suspect; he cannot survive”.  Based on what our sources told the Huntingtonian,  this complaint could become criminal if District Attorney Sini was to get involved. These allegations may not just be an employee / employer issue based on what we have been told. Huntingtonians deserve better.

It appears COVID-19 not only is making people sick, it has provided cover for the Supervisor. We hope to find out the truth on Tuesday April 21, 2020-2pm at the next board meeting to be carried out on Zoom. Of course, you, the public, are not allowed to ask questions that keep government honest, in this format on Zoom.