September 25, 2020 1:54 pm | Filed under: Business,Crime,Government,Hamlets,Heart of the Community,Investigations,News,Police/Fire/EMS | Posted by: Nicholas Wieland 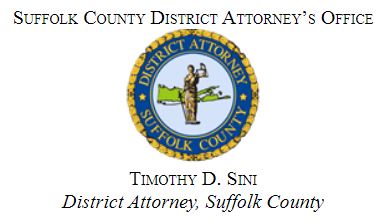 Suffolk County District Attorney Timothy D. Sini announced the sentencing of a Farmingdale man to prison for operating an advance fee loan scheme that targeted small business owners and affected 42 identified victims across the country. The defendant is also ordered to pay more than $760,000 in restitution to victims in addition to existing restitution payments in the amount of $120,000, for a total of approximately $880,000 in restitution.

“This was a criminal enterprise that preyed upon small business owners from across the country, from as far away as Washington, Colorado and Texas to right here in Suffolk County,” District Attorney Sini. “This was a complex, far-reaching scheme, but thanks to our prosecutors and investigators, justice has been served for the victims in this case.”

Demetrios Boudourakis, a/k/a “Jimmy,” 46, of Farmingdale, pleaded guilty on June 12 to Grand Larceny in the Second Degree, a C felony. He was sentenced on Sept. 4 by Suffolk County Court Judge Stephen Braslow to five to 10 years in prison with restitution judgment orders totaling $761,747 for the 42 victims. Boudourakis also forfeited $5,213 in addition to $115,000 in restitution payments collected from his co-defendants in the scheme, for a total of $881,960 in restitution and restitution judgment orders for the victims.

The investigation revealed evidence that Boudourakis and his co-conspirators operated an advance fee loan fraud scheme from as early as October 2016 in which the defendants offered loans to their targets in exchange for advance fees, and then collected the fees without providing the loans. Once Boudourakis and his employees had received the advance fees, they would cease contact with the victims. The scheme was determined to have generated stolen proceeds in excess of $2 million.

The conspiracy targeted small businesses and operated as a boiler room, typically reaching victims through cold calling and then using high-pressure sales tactics to sell them the fraudulent loans.

From 2016 through early 2018, Boudourakis operated the scheme out of a boiler room located on Broadhollow Road in Melville. In May 2018, Boudourakis vacated that location and re-established his illicit operation at a storefront located on Merrick Road in Seaford under the name “Federal Business Lenders.”

Following the investigation, Boudourakis was arrested on June 11, 2019.

This case is being prosecuted by Assistant District Attorney Tracy Hoffman, of the Financial Investigations and Money Laundering Bureau.