Make Way for the Osprey

Today is World Wildlife Day and PSEG Long Island is preparing for the upcoming osprey breeding season by inspecting known nesting areas, performing maintenance on the osprey cams it installed last year, and cleaning out debris and garbage in the nests located near the cameras in Oyster Bay and Patchogue, N.Y. 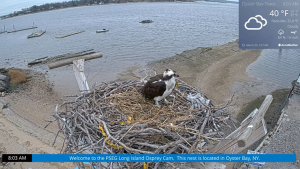 “On a recent cold, wintery day, crews visited the two osprey nests viewable via the PSEG Long Island osprey cam to clean and reinforce the cameras and remove debris from the nests,” said John O’Connell, vice president of Transmission and Distribution, PSEG Long Island. “We look forward to the return of the osprey pairs so we can all enjoy a glimpse of these majestic birds in their natural environment.”

To view the work at the nest, visit https://youtu.be/zFbNipM6ne0. For more information about osprey and to view live feed of the nests, visit https://www.psegliny.com/wildlife/ospreycam.

Human garbage is hazardous to the birds. Many times, the osprey will gather garbage, such as plastic bags, fishing wire — and in this case, even a bungee cord with a large metal hook — to build their nests. Fishing lines and strings may wrap around the birds’ feet, preventing them from leaving the nest. Plastic litter is very easy to find and since the birds live close to humans, plastics often are found in nests.

In balancing its commitment to the consistent, safe delivery of power for its customers with its commitment to being a good environmental steward, PSEG Long Island has installed dozens of new osprey nesting platforms to deter the returning birds from nesting on electrical equipment, which puts both the raptors and the electrical system in danger. Maintaining the nesting platforms helps PSEG Long Island maintain strong electric service reliability.

As part of PSEG Long Island’s annual inspections of the transmission and distribution system across Long Island and the Rockaways, electric service workers take notice of any dangerous nesting activity near electrical equipment.

Ospreys instinctively seek lofty places for their nests, often choosing utility poles and transmission structures. When ospreys build a nest on electrical equipment, it puts the nest in danger of catching fire, which can cause significant damage and outages to customers, as well has harm to the ospreys. The birds are at high risk of electrocution, as their large wingspan can complete the circuit between closely spaced energized equipment or between an energized wire and a neutral ground wire.

PSEG Long Island has installed 24-hour webcams at two of the nests safely relocated by line workers. Since the resurgence of the osprey population, PSEG Long Island and its dedicated team have identified best practices for when to move a nest, and when to create alternative safer nests for the ospreys.

Long Island is home to more than 400 species of birds, including the majestic osprey. Ospreys are large beautiful birds and a popular sight on Long Island. From the 1950s through the 1970s, Long Island’s osprey population decreased and became endangered. The effort to build safe nesting sites on or near waterways has contributed to the rise in the population of osprey.