Today, Sunday July 11, 2021, Councilman Eugene Cook had a fund raiser at Oheka Castle,  a historical site, where Democrats, Conservatives, Stop LIPA and Republicans a like, came to support Cook for his run for Town Supervisor. Of the 80+  attendees, the mix of different parties was very relieving. Not only the mix, but the powerful Huntingtonians that were there was quite positive for the Cook campaign run.

It appeared that based on Cook’s speech that donations went very well. And Cook talked about “RESPECT”. Respect towards tax payers, town employees and the budget. Respect for Huntingtonians and the LIPA lawsuit that he individually has filed against LIPA, and for the town and it’s taxpayers. Meanwhile, the current members, Council People and Supervisor caved to LIPA. 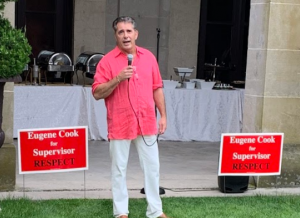 According to our survey, approximately 40% of the audience were Democrats while the remaining 60% were Republicans, Conservatives, and Stop LIPA.

It appears by the audience’s reaction to his speech and their comments, that Cook has a big chance to win in November.